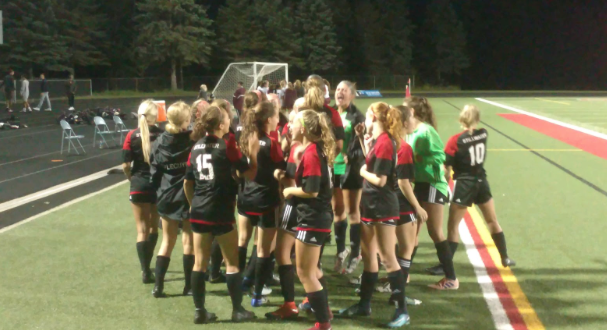 Stillwater’s varsity soccer teams returned after the summer to play competitively against other teams in the conference. After last year’s impressive records, they knew they were being watched. Both varsity teams have worked hard to make it to the championships and to win the title for their team. 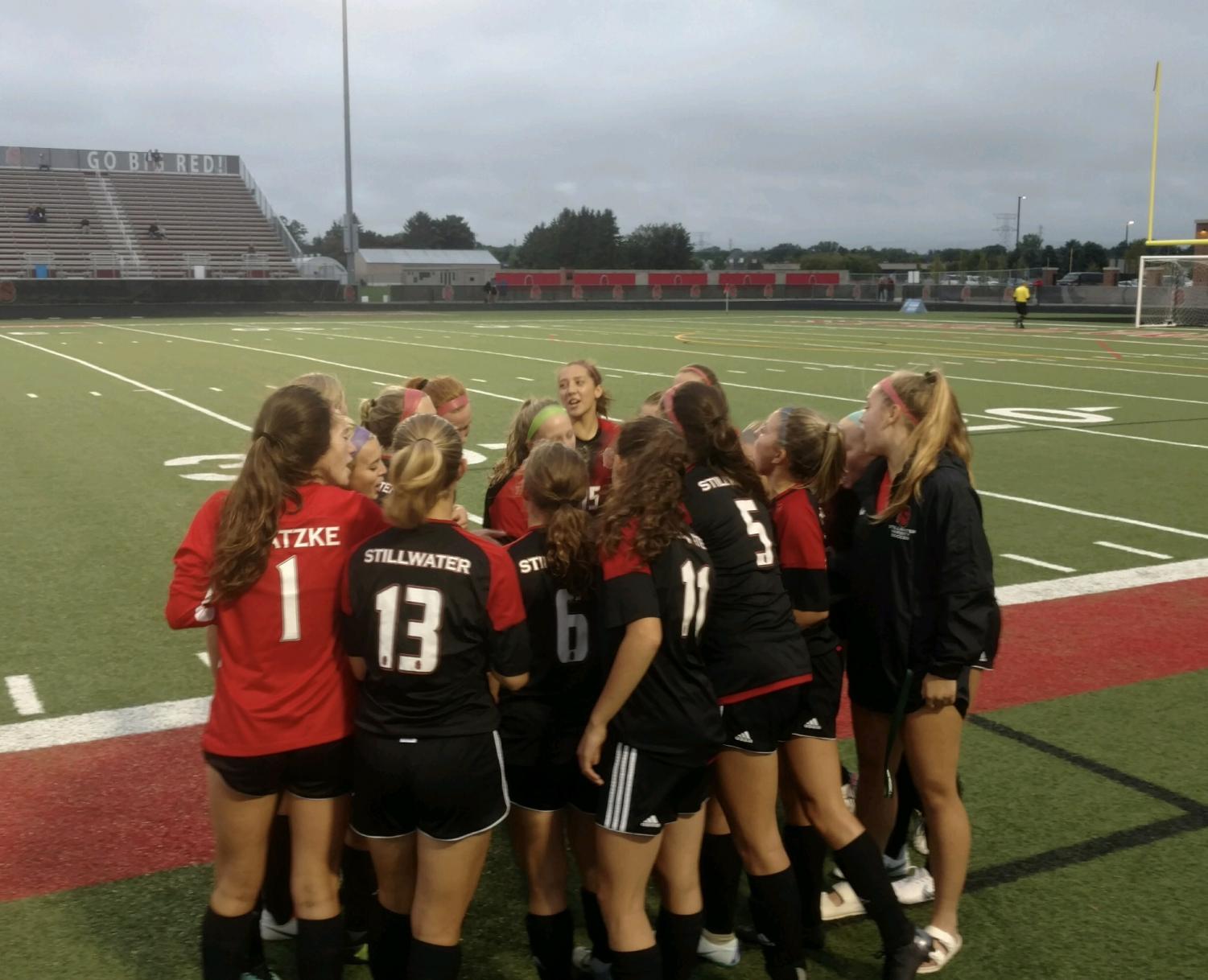 Photo by Annika Brown
The girls focus, and get pumped up before their game against Forest Lake. “I can see us going to state if we stay focused, and not letting off the gas pedal,” senior Evie Kohn said.

The girls varsity soccer team is having an exciting start to their 2018 season. With nine games in the books, the girls are focused on winning a state championship title.

After many hours of practice and bonding during summer break, the ponies girls soccer team feels they are ready for another action-packed soccer season. Since August, the girls hit the field motivated to dominate the opposing team every Tuesday and Thursday.

Their most recent win against Duluth East, was the highest scoring game of the season. Resulting in a score of 5-1, the girls worked together to succeed against their opponent.

“We have a lot of new players, so they’re coming in with a fresh, and determined mind. We all just want to win so we’re pretty focused during the game,” senior Evie Kohn said.

There are seven games left in the regular season. The team’s current record is 7-1-1.

“We have been super consistent, and more positive this year,” junior Rachel Folden said.

Marisa Bonilla is one of the three new freshmen on the team. Out of the three games she has played in she has a record of one goal and two assists.

“It’s a little strange because everyone is a lot older and bigger than you, but it’s good to look up to them,” freshmen Marisa Bonilla said.

The team traveled out of town to Moorhead, earlier in the season. The weekend away, gave the girls a chance to bond as teammates.

“There’s more cohesiveness between the team, and there’s a better understanding of the equality of team mates.” Assistant coach Shawn Nelson said.

With the goal of winning state, the ponies will have to advance further this season, than the last. This means, winning sections and playoffs.

When asked about the difference between this season and the last,  Rachel Folden said, “I think we got too excited and a little bit too cocky.”

“It’s all about having a positive mindset,” she added.

The team believes they can win their division, and advance all the way to the State championship. But they know they have to stay focused, and be consistent every game.

Nya Dobier said, “We just have to come out and be a first half team, versus a second half team.” 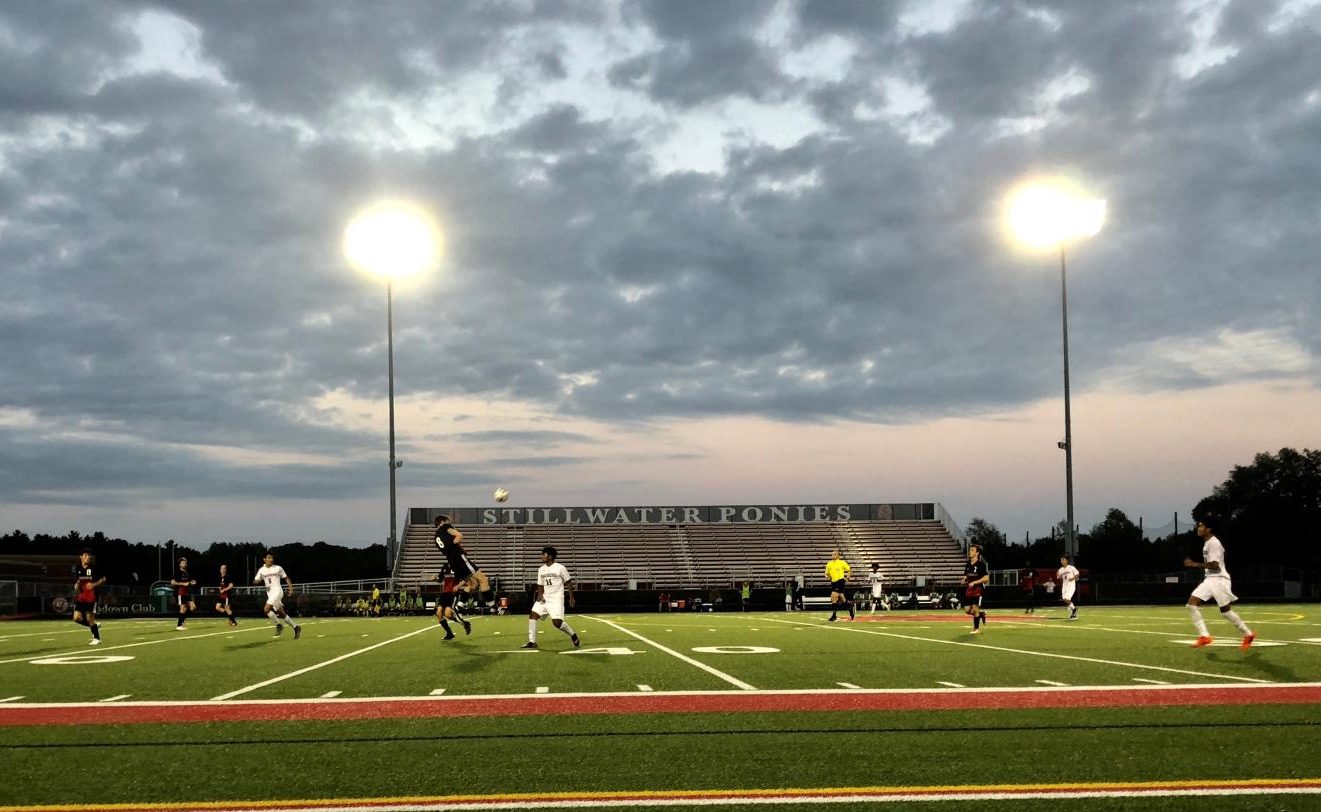 Photo by Ashlynn O’Connor
The boys’ varsity soccer team takes on the Raiders, resulting in a win helping them with their goal to make it to state.

“The Bank”, is where the boys’ varsity soccer team won the State Championship in 2016 and placed second in 2017. The boys are achieving their goals by their hard work and mindset to get to state once again this year.

The soccer team has had great success this season already. The soccer team’s record is strong, giving them the rank of first in the state.

Junior Ben Snyder said Washburn is their toughest competition for the season. Washburn is ranked second in the state, and they have a strongly built team. The boys’ soccer team played a challenging game against Washburn September 15th. They played hard until the end of the game but ended up losing to Washburn 1-0. Following the game, the boys’ team lost the rank of first in the state and became second in the state.

Junior Joseph Young said they push through the loss, they’ve got all the talent in the world and we’ve got the mindset to keep pushing for the state. Even though that was their first loss of the season they still have 6 games left of regular season play and are going to give all they got into them.

Young added, their coach has been building a state winning team for years. Their coach teaches the best tactics and skills for the boys to use when they play. Their coach pushes them and makes them work very hard because he knows that all have great potentials. The coach knows that every player on his team has the right drive to bring home another state championship title this year.

“In this day and age, we have a pretty good chance to go out there and win,” senior Captain Logan Huber said.

On September 18th the boys did exactly what Huber said they were going to do, “go out there and win”. The boys’ varsity soccer team played Forest Lake at the high school and beat them 5-1. These boys are not going to back down they are going to give all they got at another chance to get to state.

The boys’ varsity soccer team has had successful past seasons and is having a successful season this year as well. The program is something that has been building to the level they are at for a very long time. When watching the team play it flows so well it looks like magic on the field. The boys keep bringing that magic to every game trying to be able to get to “the bank” to show everyone what they got this year once again.