The swim and dive team has become a household name since 1975, the year Brian Luke took over as head coach.  Since 1991, the Ponies have won 14 section titles and 20 conference titles.  Given their decorative history, the Ponies have learned to preach teamwork and the idea that the best swimmer has the same importance as the worst.  This mentality is brought through every practice, as the Ponies continue to push each other two and half hours a day, five days a week, for three months straight.

The expectations are held at a level playing field: if you can get in and do all the practices, you are going to be treated just like everyone else. For senior Alec Olson, he has exceeded these expectations, in and out of the pool.  Born with cystic fibrosis, Olson had developed hydrocephalus by the time he was 10 months old.  Excess amounts of fluid formed in his brain and put pressure on his octave nerve, causing him to become legally blind.

“[Being blind] gives you a very different outlook. You grow up very different and not in the same kind of world,” Olson said. “You have different values, and you have to learn a different way of life.”

Despite his condition, Olson found his way into the pool his freshman year when his friend encouraged him to join the team. Olson is able to see shadows and movement, allowing him to see the lines at the bottom of the pool, as well as the wall. His teammates help him when they can by getting him up to the blocks and walking him around the poolside, while always cheering for him.

“You couldn’t tell he has that impairment,” junior Jack Batterton said. “He swims just like anyone else… We complain about practice, but we don’t really have it that bad. Just him always being there and always participating is encouraging.”

Olson is never seen to complain, as he shows his independence, determination and fortitude throughout his life. During practice, he never complains and wants to be successful as much as anyone else.

“[Alec has]a genuine devotion to the sport. No one would give up three months, swimming 2.5 hours a day, blind,” junior Zach Alcieums said. “We can tell that he really loves the sport, and he does it not only for him, but for the team as well.”

Olson shows life kindness and an understanding to others, however, Olson still struggles with day to day forming bonds with new people. Talking with new people can be a struggle, which has forced him to be independent at a young age, and step out of his comfort zone.

“[The] biggest challenge isn’t exactly what you’d think it is with moving around and doing things, but socially by talking to people,” Olson said. “It’s hard to interact with people day to day, and that’s what makes it hard.”

Day by day, Olson puts his best foot forward and makes the most out of his circumstances. While quiet at first, Olson shows his curious and uplifting personality through conversation. He has adapted to his life and persevered in ways that only few are able to do. Even though many days are difficult, every day is worth it to him. His outlook on life is different than anyone else’s, but for people like him, he asks others to be open hearted for those who are afflicted by similar diseases.

“Try to step outside your comfort zone, not like with sports, but try to talk to people that make you feel uncomfortable. People seem like they’re not quite all there, but that’s just in your head. Some people have problems, some people don’t,” Olson said. “Just try to talk to people and get to know them more. It gives others a fresh perspective when you talk to them.” 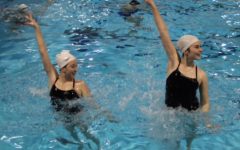 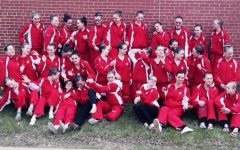