Band’s putting on a rockin’ lock-in

The doors are shut and the band is rockin to get ready for the return of the annual band lock-in on Jan. 23.

The band is back and ready to get together in the upcoming band lock-in. A favorite of band students, the excitement of all members is in the air. The band comes together to share commonalities and to make new friends with each other by playing games and doing various activities to get to know one another.

It works similarly to a team bonding exercise in which the band comes together and talks and parties and has fun. The camaraderie created at the lock-in  helps the members gain confidence in each other, which greatly benefits in the pieces that they play.

The lock-in is used as a sort of centripetal force to make all of the band members feel included and useful to the band team. No matter what section the member may play in, all will be included in order to unify the band. 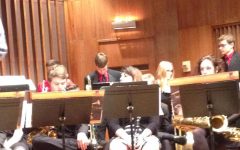 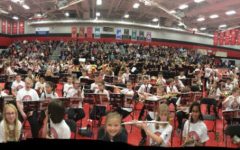 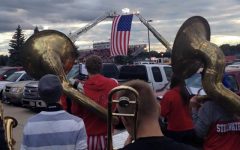 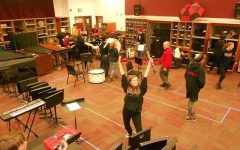 Junior Jack Nelson, a newcomer to this event, said, “I am very excited for this really fun part of a fun year”. He added that the lock-in is, “Meant to be a bonding opportunity for our band so that we can all better get to know each other so in turn we can all play better as a group.”

There will also be activities for the band to play together, which will also help bring them together. Things like sports, video games and they may even get together to play a bit of music to get everyone included throughout the night. Nelson said, “From what I have heard, there will be games, both video and board, sports, movies and many more fun activities.”

Music can be one of the strongest ways for people to come together and there would be no better way to experience a bond in music than in a band. Junior Beatrice Lawrence said, ” Music is very emotionally charged. It creates a very strong bond when you play it with other people. It is the main force that holds us[the band] together.”

Lawrence included that the lock-in, “Does have a significant effect on the band. We all grow closer and develop fun memories with each other,” She added, “We all have to blend in and compliment each others sounds in order to perform to the best of our abilities.”

However, without any activities, the band members wouldn’t be able to come together and hang out with each other. Some activities that are being mentioned are video games, sports, and even a parachute for a game of “Sharks and Lifeguards.”

Band officer and senior Mikayla Hildebrandt said some of the activities will be, “A few games like charades, dodgeball and Mafia.” She confirmed that the band may also be getting a colorful parachute in order to play some fun parachute games. Hildebrandt commented on the events of last years lock-in with, “Last year we played charades, went down to the gym, watched some movies, played video games and a little bit of Mafia.”

The band officers are also deciding on whether they want to have pizza, Subway or even Chipotle catered at the lock-in. Even with the recent E. Coli outbreak in the popular fast food chain, Hildebrandt was quick to respond with, “There are some people who are in love with Chipotle in the band.”

Overall the common theme of the band lock-in is to better unify the band so they can perform better and get to know each other much more. Each member elaborated that the lock-in is meant as a bonding opportunity for all the members to get to know one another, learn their likes and dislikes and bring the band together as a whole.