“Congress shall make no law to abridge the freedom of speech.” The First Amendment of the United States Constitution seems to be very clear about the guidelines surrounding the ability to voice your opinions, the government cannot abridge, or impose restrictions on, free speech. The problem of this amendment arises in its practice. There seems to be a fine line between free speech and hate speech and that line is even murkier when implemented online through social media.

Schools and jobs all have different rules about social media, most jobs look at employees’ social media accounts before they hire them and schools often monitor activity on social media to catch cyber bullying and dangerous activity.

Since most businesses are privately owned, the government cannot stop them, nor should they, from looking at possible employees’ social media accounts. Schools, on the other hand, should be able to monitor school computers, but should not be able to monitor online use out of school without probable cause and a warrant.

The issue of online censorship, in schools especially, has been hotly debated since the internet first came to fruition. Since, for the most part, social media is a permanent record of one’s ideas and interactions, it can often be much easier to punish students who represent themselves online as they would in person instead of how they would represent themselves in, for example, a letter. With a generation of children and teenagers, the bridge between spoken word and an online post is much shorter.

Since newer generations, especially, have less experience with the power of words online, students should be given some slack. Suspension and expulsion do nothing to help a student learn the power of written word. They also do not learn how to express their opinions in an appropriate and constructive way. The current attitude from school officials towards students seems to be to stop students from having opinions at all.

Employers should be able to look at an applicant’s social media,” sophomore Lizzie Campbell said, “they need to see if the employee is qualified for the job and is a good fit.”

“Unless it correlates directly to school what a student posts should be their own business,” junior Hannah Beech said.

If schools do not have the right to monitor student internet activity, do employers? Since most companies are private industries, they have the right to evaluate employees on their public social media accounts. Jobs also tend to be for an older, less technologically native age group, a hypothetically “more mature” demographic with fewer of the second chances and learning opportunities common in most school environments.

“Employers should be able to look at an applicant’s social media,” sophomore Lizzie Campbell said. “They need to see if the employee is qualified for the job and is a good fit.”

While jobs and schools are similar in many ways, ultimately, schools are learning environments where students should be free to make mistakes and learn from them without as many repercussions as the professional environment of a job. This attitude of learning should go into social media as well. Unless there is probably cause of bullying or other dangerous behavior online, school officials should not have the right to monitor internet usage outside of school. To protect the right of free speech, students can challenge the authority of school officials in censorship cases. 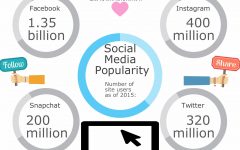