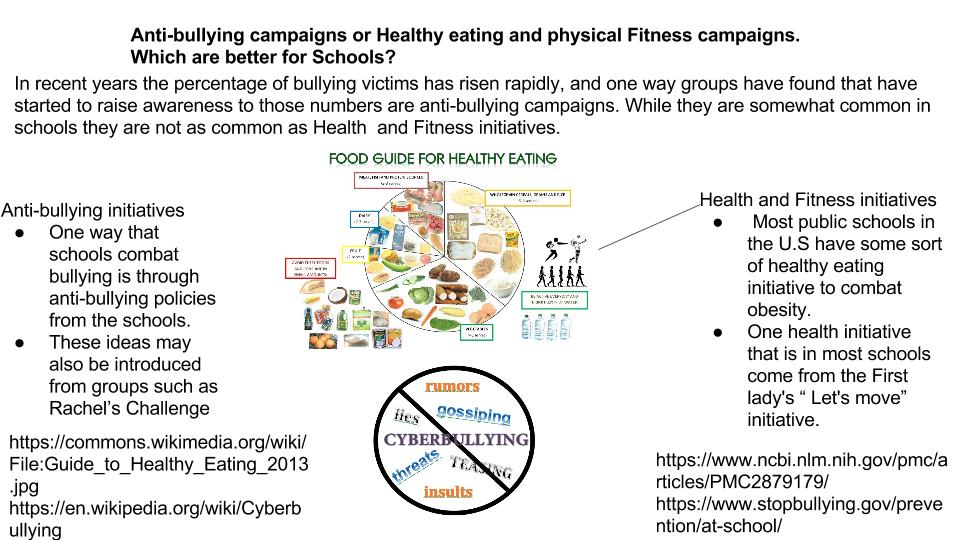 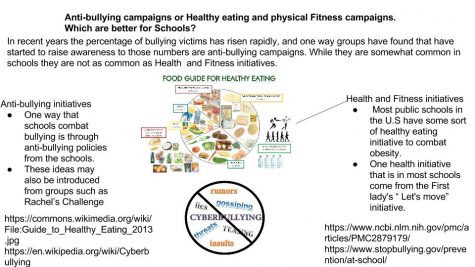 Healthy eating, physical fitness, mental health specialists and anti-bullying campaigns all have one thing in common: they are all health initiatives. What’s special about health initiatives in schools is how they effect the students within the school in which the program is being used. Rachel’s Challenge is an anti bullying campaign to help raise awareness on the effects of school bullying but to help create a more peaceful school environment. Stillwater Junior High School, they have moved from Rachel’s Challenge, to a healthy food and physical fitness initiative.  While healthy eating and physical fitness are important, schools should also focus more on anti-bullying.

Rachel’s Challenge is an anti-bullying program was started by Darrell and Sandy Scott.  The program is dedicated to their daughter Rachel Joy Scott, who was gunned down in the Columbine school shooting on April 20,1999.  After that many students who were impacted by Rachel soon shared stories of her kindness to her parents, and it showed how someone else’s kindness can have an effect on others.  The program grew and now go to many different schools around the country, including stops to Stillwater Junior High School to show how people are able to affect someone else through their actions or words.

Programs like these are good for the students of junior highs or middle schools as it is the first time many of them have met people that they had not gone to school with and may show how these words or actions can hurt someone else, or even any action could cause someone’s opinion or thought to change. These can be an important lesson that could stay with them for the rest of their life and could spread that message to others.

The focus on anti-bullying initiatives should be brought in and used more so  they can create even safer school environments for students to learn in.  In a study conducted by DHHS, around 29 percent of students report that they are bullied in middle school.  But, to counteract the alarming rise in bullying, more and more anti-bullying campaigns are being put together to help teach students how to stop the rise of bullying cases.

The fact that some students dread coming to school just because they are bullied is wrong; no one should be denied an education based on the fact that they scared. The percentage of  overall bullying is astronomically too high; nearly one third of all students in the United States are being bullied. But Stillwater Junior High School is cutting an anti-bullying campaign, that helps provide support to anti-bullying messages.

The importance of anti-bullying campaigns outweigh the importance of heathy eating do to the fact that heathy eating campaigns have been around since the 1990’s. With the major focus point being to help establish heathy eating habits in to children from an early age.  But anti-bullying campaigns have just started to gain traction in schools in the United States,  the reason why it has taken this long is that people believed that bullying was just a part of school and was just not important. So by adding in these campaigns, it shows that the school cares not only about students physical health but also their mental health as well.

In most schools, both campaigns will effect how students grow physically and emotionally, but if the student is being affected by bullying then the effects gained by the healthy eating campaigns are being lost and the student may go down a destructive path, but if schools can find a way bring in both programs in to their schools their students will be able to grow and thrive in that environment.