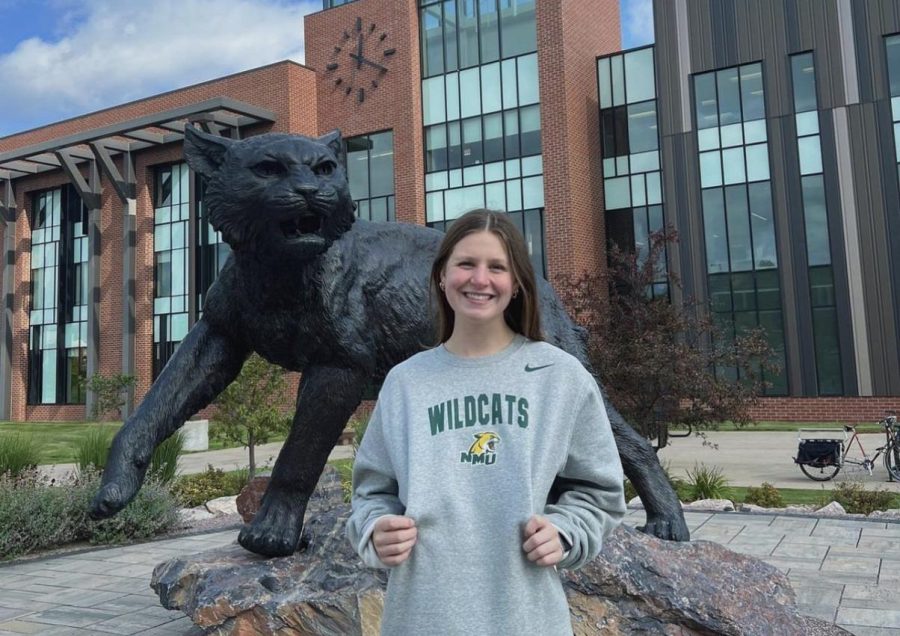 Senior Avery Lorinser in front of the wildcat statue. She will be continuing her lacrosse career at NMU for the next four years.

“Ever since I started getting serious about lacrosse it has always been a goal for me to play in college,” senior Avery Lorinser said.

In the fall of 2022, Lorinser announced her commitment to Northern Michigan University (NMU). Lorinser has decided to further her lacrosse career and play at the collegiate level.

In 2020, a survey showed that there are roughly 99,750 student athletes at the high school level. For lacrosse, Lorinser is among the 2.6% that continue to play in college.

For many, the fall of senior year is stressed filled trying to find their perfect fit for the next four years.

Lorinser explained that her biggest struggle was trying to find the right college and the right team. She did not quite know if she wanted to play at the next level, but NMU made it a no-brainer.

Lorinser has always pushed herself to be the best she can be so she can turn her dreams into reality.

Lorinser explained that in the off season, she works out twice a week with her team at Altius as well as working out on her own. She is on two different club teams and practices weekly.

She is the perfect example of how hard work outside of practice pays off. She now will be taking a large role on the high school team this year with the opportunity to play another 4 years in college. Her determination, commitment and love for the game will show the younger girls anything is possible”

Lorinser has been playing lacrosse ever since grade school. Growing up around lacrosse, Lorinser always enjoyed playing the game she liked with the people she loved. She has always had an immense amount of support, but her two biggest fans would be her parents.

“They came to every game rain or shine and have done everything possible to help me commit,” Lorinser said.

Recruiting is also a very stressful time for athletes as well. Many do not understand the stress behind putting yourself in front of college coaches and performing to the best of your ability. The recruiting timeline and process can be different for everyone. Not knowing if you want to play lacrosse in college as a junior or even sophomore can drastically change the outcome of the college you pick.

“A mistake I made is I waited until I was older and then there was a lot of colleges that were less willing to talk to me,” Lorinser said.

Lorinser also explained how it was not a last minute decision but instead a “full four year task”.

“It was fun to see her reaction to each campus and you could really tell she fell in love with NMU,” senior Keira Jelinek said.

Jelinek and Lorinser traveled across the nation together over the summer touring colleges, going to camps, and playing in tournaments.

Lorinser is not only a role-model to her teammates and youth associations, but an athlete that makes the coaches job easy. Not many athletes are super coachable and able to take both negative and positive feedback, but Lorinser checks all of those boxes.

“She is the perfect example of how hard work outside of practice pays off. She now will be taking a large role on the high school team this year with the opportunity to play another four years in college. Her determination, commitment and love for the game will show the younger girls anything is possible,” coach Carly Fedorowski said.

Over the summer, Lorinser has put in an enormous amount of time and effort to accomplish her goal. With friends and family supporting her every step of the way it has made the choice to play lacrosse at Northern Michigan University a simple decision. 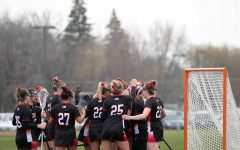 Girls lacrosse hopes to have successful season with new coaches 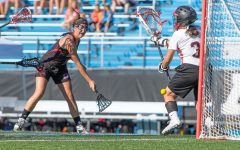 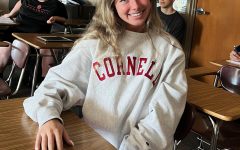