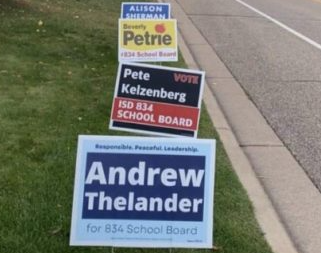 This is a of picture of the signs for the school board election. All the candidates are endorsing themselves. (Photo by Alex Reedy)

This is a of picture of the signs for the school board election. All the candidates are endorsing themselves.

Nine candidates run for school board

There are nine candidates running for seven seats on the District 834 school board. A general election will be held on Nov. 8 and the elected board members terms will start on the first Monday in January. Voting will be available at the town halls.

Director Beverly Petrie is one of the candidates who is running for re-election and believes that if new members are elected, it will give the district a chance to view problems in different ways and possibly come up with better solutions.

“This is always the benefit of bringing in someone from the outside, they have a different way of looking at things and you know changes sometimes are necessary. Being able to look at things in a new way is a first step to change,” Petrie said.

There are five seats that will be open, four of the five seats available are for four-year terms and the one other open seat is a two-year term. Two people are running for the two-year seat which creates more competition for that one seat.

“If voters are going to look at those two candidates, they might choose the most experienced one, and that would be me,” Petrie said.

I am particularly proud of our success in hiring a superintendent whose leadership and ideas are moving our district in the right direction.”

“I am particularly proud of our success in hiring a superintendent whose leadership and ideas are moving our district in the right direction,” Kelzenberg said.

Kelzenberg believes with the chance to serve another term he would be able to build off of what the school board already has going on. He also address more problems around the district that need to change.

Kelzenberg said the district needs to focus more on the staff and students alike than they have been doing in the past like the mental health of the student, especially after COVID and online school.

Petrie feels confident about her campaign and her journey to re-election. Petrie has many things she is planning on doing if re-elected, but the main one is creating stability within the leadership.

“I believe that we have had so much instability on leadership over the last seven years and I think that we need to get back to what we have always been and that’s an excellent school district,” Petrie said, referring to what she will do to improve the district.

For more information on who is running, check out the candidate forum on the Stillwater Schools website. 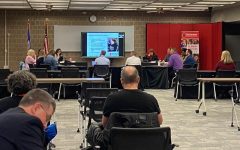 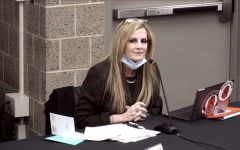 School board searches for permanent Superintendent 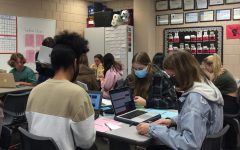 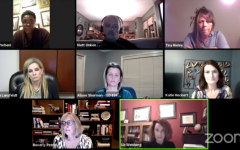 School board lays out 3-part plan to address district funding