Clinton has got a huge lead! Trump rebounds! The race tightens! In this election the polls seem to change their mind once a week, but in the long run, these large, corporate media sponsored polls aren’t accurate.  It’s not because Fox News favors Trump, or CNN favors Clinton, it’s because all of these polls are gone about in the wrong way.  National General elections aren’t taken as a result of direct national polling, they’re taken state by state, and the race is decided by electoral college votes, nothing like the 1,000 person telephone interrogations these news outlets do.

Mike Kaul, US History teacher, said “Voting is a state responsibility, so the Electoral College differs among some states.  Most are, if you win the popular vote of the state, you win all the electors.”

This is in an effort to give more people a voice, rather than having elections be dictated by big cities like New York and Los Angeles.  The result however is that the popular vote of the country is not always represented the same way the polls show it.  For example CNN polls are conducted among 1,001 people over telephone.  Quite a difference from the electoral processes described above.

“What’s happened is that states have become so predictable, that they have become either red or blue, so it just comes down to a few states that swing either way.”

So when a poll is taken, in reality, a conservative voter from Mississippi (one of the most conservative states in the nation), has much less value than a conservative voter in one of the swing states. Mississippi is one of those states that has become incredibly predictable, so Trump will win it either way.  Almost all general election polls will give each voter, from each state, the same value in their overall percentage.  Since this is completely different from the way the election process runs in America, it doesn’t make sense to say these polls are accurate representations of the country.  There is a better way to take a poll, and even predict the election. The most accurate way of telling how the nation will vote is to mimic the electoral college, not by taking a survey of the country, but by counting the votes the same way they will be tallied in the election.

So to get an accurate prediction, or at least to see how the nation would vote if the election were tomorrow, we have to mimic the electoral college.  This isn’t actually that hard, and most of the work is already done, by state-by-state public polling done by local media.

By taking the most recent statewide polling for each state, and referencing it to the number of Electoral votes of that state, then tallying the votes for each candidate we can gain at accurate picture of the election.  For example, in the most recent state poll of Maryland, Clinton leads Trump 54 percent, 25 percent.

This would mean that Clinton gets all of Maryland’s 10 electoral votes.  Minnesota shows Clinton leading by a wide-margin giving her another 10 electors.  But in Texas Trump’s 6 percent lead wins him 38 electoral votes.

Once all the states are tallied, the total tally for the candidates is extremely different from the story the large media polls tell.  Clinton leads Trump 289 Electoral Votes to just 180, leaving 45 electoral votes tied.  Meaning Clinton soundly wins the 270 needed to win, even if all 45 tied votes go to Trump (Independents, Gary Johnson, and Jill Stein don’t poll high enough in any states to win any votes).

Though this election season has been wrought with unforeseen issues and controversies, major swing states (like Colorado, and North Carolina) across the country have begun turning blue or leaning democratic.  This is a phenomenon the large media polls just don’t tell. The only thing National Polls can do is give a general mood of the country. So regardless of what these large surveys say, Hillary Clinton will win this election. 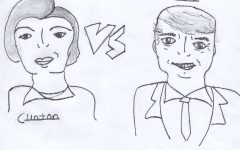 Clinton proves to be front runner for upcoming election