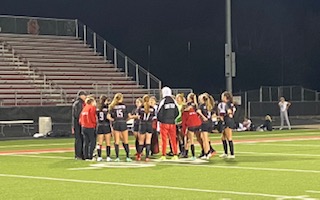 The girls huddle after a win over Maple Grove 3-1. They celebrate another win in the books.

With last year’s disappointing season end, the girls soccer team has something to prove. The girls are working hard to make up for lost time. Last season, the girls had an amazing run finishing first in section 4AA. Though, due to COVID-19, they were not allowed to participate in the state tournament because it was canceled.

So far the team is undefeated in their conference. They defeated Woodbury 5-0 on their home field before taking on White Bear Lake, winning again 2-0. Their highest scoring game of this season was 9-0 versus Moorhead (non-conference).

“We’re just a team of really good players,” senior captain Marisa Bonilla said. “Everyone works together and knows how to play together.”

Head coach Mike Huber and senior captains Bonilla and CJ Fredkove lead the team. Huber has been coaching for eight successful years as well as coaching younger teams in the area.

When asked about his coaching philosophy, Huber said that he wants to see improvement. If they are not improving or working hard, then he is not working hard enough off of the field. He tries to make the practices “competitive but fun.”

Similarly, Bonilla’s career goes back several years. She started playing at a young age. Soccer has always been one of her interests. After high school, she wants to continue playing, but at a less competitive level in order to focus on her education.

Girls high school soccer has always had a high level of competition. The girls varsity team is working hard and striving for another successful season.

“Just like in every drill, we give all our effort and expect everyone else to do the same,” Junior Luka Johnson said. About the team culture, she said they “motivate each other to do better,” and, “Everyone wants to win so we’re all putting in the work.”

“I think we are more motivated, and we want it more than any other team in the state because last year we were obviously ranked number one and we won sections, won conference, but did not go to state. And I think we all feel just robbed of that opportunity and we want to come back this year, and we have something to prove because we did not get it last year, ” Bonilla said.

This year’s state tournament will run Oct. 26-28 and Nov. 3-6 and the Ponies are on course to get there.