The Pony Express • May 10, 2021 • https://sahsponyexpress.com/98281/blogs/playlist/brockhampton-releases-sixth-studio-album/ 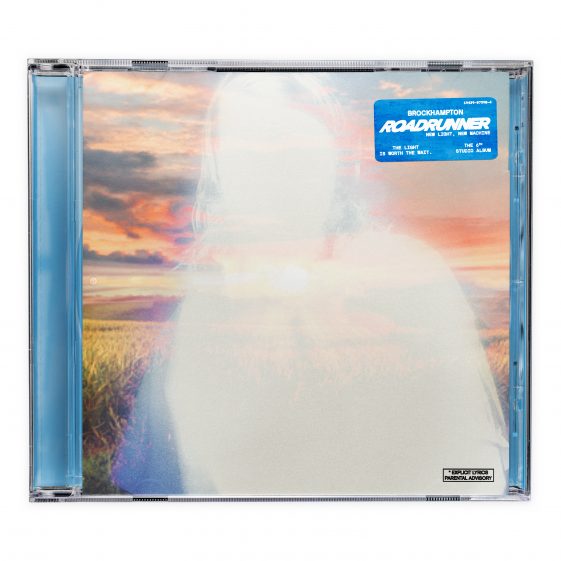 Fair use image from ROCKHAMPTON

This is the artwork for the new BROCKHAMPTON album. This record was released on April 9th, 2021.

The Internet’s favorite boy band BROCKHAMPTON have just released their 6th studio album, called “ROADRUNNER: NEW LIGHT, NEW MACHINE” under RCA records. The band exploded onto the alternative hip hop scene in 2017 with their legendary Saturation trilogy, and for that year, they were on top of the world. In 2018 however, the supergroup was rocked when allegations of sexual assault came out against one of the members, Ameer Vann. Vann was kicked out of the group, and the boys were feeling the repercussions of this for the next 2 album cycles, “iridescence” in 2018 and “GINGER” in 2019. Now, the boys have seemingly found peace with their situation on ROADRUNNER, but that still doesn’t mean this album isn’t any less heart wrenching than previous.

This record is the boys most confident endeavor yet, and that is evident right when you hit play and hear the first song “BUZZCUT”. Kevin Abstract opens with an energetic and thoughtful verse over this siren sounding beat, and then the Danny Brown feature elevates that energy two fold. Another great example of this confidence that is shown is on the track “BANKROLL”. With features from both A$AP Rocky and A$AP Ferg, this track is super groovy. This track also debuts Jabari Manwa, the group’s new vocalist, and he absolutely kills his verse on this track. Two more hard hitters I want to mention are “WINDOWS” and “DON’T SHOOT UP THE PARTY”. Both of these tracks are two of the best tracks the group has ever made, the former is a track where everyone gets the spotlight, but the standouts are definitely Merlyn Wood, Matt Champion, and Ryan Beatty. The latter is this super raw track, with it being almost nothing but pure energy, and it keeps you on your toes the whole time it’s on.

While this record has a ton of super hard hitting cuts on it, the group also knows when to dial the knob back a bit. The track “CHAIN ON” is a super chill track, with great verses from Dom McLennon and a feature from JPEGMAFIA. Another great example is “I’LL TAKE YOU ON”. This cut gives people like Bearface and Joba a real chance to shine on the hook, and the track “WHEN I BALL” has this beautiful string section in the instrumental, and Dom and Matt both give great verses. With the calmer tracks, there are some duds that come in the tracklist. The first one is “COUNT ON ME”. This track just feels like a very bland take on the sound that the band has become so iconic for, and Matt gives a verse that really needed to go back to the drawing board. The worst offender of this though, is “OLD NEWS”. This song sounds like a failed attempt to make a summer song, and it just comes across as boring. The hook is weak, and the verses don’t pick up any of the slack for it. “WHAT’S THE OCCASION” is a bit of a harder hitting song, but this is one that just kind of dissolved into the tracklist, not a bad song by any means, but a little forgettable.

The three tracks that haven’t been mentioned yet are being separated for a reason, they all tell a story that is super dark, and can probably make this album a hard listen for some, but at the same time, these are some of the best songs on the album. It starts on track 5 when “THE LIGHT” starts. Joba takes the first verse and describes in detail about how his father committed suicide late last year, and how he’s dealing with the news of it. This verse rips your heart out, throws it on the floor, and stomps on it. Kevin then takes the mic where he also gives this gut wrenching verse about finding himself, his sexuality, and his relationship with his family. The next song in this series is “DEAR LORD” which is mainly just an a capella from Bearface about how he grieves for his friend, and hopes that he’s able to find some sort of peace.

This track then blends beautifully into the final cut on the album “THE LIGHT PT. II”. Which is another heartbreaking cut from Kevin and Joba where they touch on basically the same topics and themes from the first part, but with even more detail that just puts you in a super dark state, but in a weird way, it’s also a beautiful way to close out the album, even though it may feel like it ends on a lull, it’s how the boys are feeling right now with all the trauma they’ve been through. This album, despite its flaws, is one of the best projects to come out this year, and any fan of either hip hop or pop music needs to put it in their rotation for 2021.