Another virus makes its way across America: anti-Asian hate 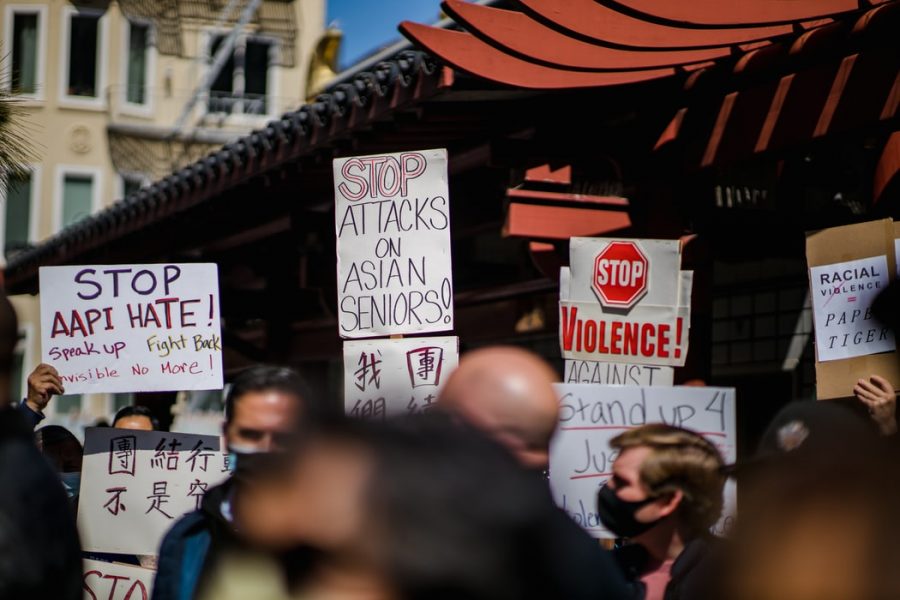 Demonstrators hold up signs at a protest in San Francisco. Rallies advocating for Asian lives have appeared in many major cities across the country, as anti-Asian hate crimes are increasing.

Following a year of xenophobic rhetoric and racially charged attacks, the Asian American community has faced a terrifying increase in violence. Stop AAPI Hate is a coalition dedicated to tracking reports of racism and discrimination against Asian Americans amidst the pandemic, and they received at least 3,795 reports of anti-Asian hate incidents since March last year. That number underestimates the actual number of racially charged incidents, as many cases are not reported. Indeed, the United States has witnessed an alarming spike in Asian hate crimes ever since the pandemic, but COVID-19 is not the sole reason for these attacks. Asian Americans have endured a broad and underlying history of anti-Asian sentiment in this country—one that traces farther back than Trump and the pandemic.

The conspiracy theories about China and referring to COVID-19 as the “China Virus” or “Kung Flu” might seem innocent, harmless and maybe even funny, but that could not be farther from the truth. When we warned that this would incite violence against us, we were told to “take a joke.”

Xiaojie Tan, Vicha Ratanapakdee, Pak Ho and so many more are now dead. These attacks sent a wave of advocation and awareness to social media, people sharing the same few posts to their Instagram stories or trending hashtags on Twitter. However, sharing the faces of hate crime victims and advocating for change is one thing, but truly understanding the reason behind these attacks is another. It is difficult to describe anti-Asian racism when a large portion of society lacks a coherent understanding of Asian American history.

The shooting in Atlanta on March 16 is a prime example of why the fetishization of Asian women is dangerous. It leads to violence and death. This man’s uncontrollable sexual desires, what a sheriff deemed as a “bad day,” resulted in eight people’s last day. There is this disgusting preconceived notion that all Asian women are submissive and weak, and they have been sexualized since the founding of our nation when Chinese women were branded as prostitutes and treated as subhuman.

These docile tropes relate back to the model minority myth—the idea that every Asian possesses a high socioeconomic status and education and, therefore, is more “successful” in this country than other ethnic minorities due to inherent intellect and a compliant, law-abiding nature. Despite being debunked, white America continues to use this fallacy as a way to avoid responsibility for addressing racism and its consequences. Asian Americans are put on a pedestal to justify the belief that there is no systemic racism in this country. Moreover, it creates a wedge between people of color, as the tension between the Black and Asian community remains high. What we forget is we share a common enemy: white supremacy.

“Many people, including other BIPOC, believe that Asians are ‘basically white’ because some of them are more successful than their white coworkers, but this myth isn’t true at all. This myth is extremely harmful because it throws the Asian community against other BIPOC. We should be working together, not playing the Oppression Olympics,” junior Jay Lohr explained.

Many people who talk about this issue on social media mention how racism is normalized, specifically towards Asians. However, when it is said like that, it is almost as if we are comparing our oppression to other races, which is the very last thing we would want to do. This is not something to debate about. It is not one group against another. It is all of us against the common issue that is racism. Racism, in general, is normalized. Whether it be a stereotypical joke made at school or a violent hate crime in public, history shows it typically goes unnoticed and is downplayed tremendously. Here is the problem. Far too many of these “jokes” are brought up in casual conversations as if they hold no blatantly racist meaning. Many times, it is the little remarks that hurt the most: attributing race to good grades instead of hard work, or being mistaken for another Asian in class. They are just words, but they accumulate to the deeper issue of racism embedded as normal practice in society.

Senior Angelina Vang recalled being referred to as racial slurs in public and having people walk by and pull their eyes back as if it were okay to do so. She remembers her first day of kindergarten, and when someone asked her how dogs tasted, she was genuinely confused. This is just one example of a common joke thrown around that dehumanizes Asian Americans.

Anti-Asian sentiment is not anything new, and it is important to recognize that. Tuyen Nguyen, an 83-year-old Vietnamese man, was beaten in a parking lot. Nazma Khanam, a 60-year-old Bangladeshi woman, was stabbed to death while on a walk. Tian Sheng Yu, a 59-year-old Chinese man, died after being knocked to the ground. All of these incidents happened before the pandemic, so I find it interesting how we are having such a societal movement only now. It seems as if certain stories get acknowledged only when certain people and mainstream media choose to pay attention to them. This violence we are seeing is a result of an unacknowledged Asian American history of racism, discrimination, and xenophobia. It is crucial to call out injustices always, not just when they are trending. When something is trending, people are already dead, and it is too late. It took a massacre for people to care—not the murder of our elderly or the hateful rhetoric—but a mass shooting.

“Asian hate crimes have been happening way before COVID-19, but then it wasn’t talked about on the news or social media because it seemed like an ‘irrelevant issue.’ And because these ‘irrelevant issues’ didn’t matter to the world, the public wouldn’t bother about them. People only care about what they saw online, not acknowledging or noticing the rising problems in the Asian community,” junior Mackenzie Vang said.

Lohr also explained he is glad people are becoming more aware and knowledgeable about Asian lives, however, there is still a part of him that is “sad it’s only happening now.”

The day after the shooting in Atlanta was the first time I ever saw so many people posting about these issues in the Asian community. I understand the good intentions behind spreading awareness, but the last thing I want is for this to become a trend. Activism today is oftentimes defined by hashtags and posting pastel infographics on Instagram stories rather than an actual understanding of history. Education matters. Sharing informational articles, websites, and resources will have better long-term effects than hashtags and words that hold little meaning. My problem with seeing posts stating “Stop Asian Hate” or “Asians are human too” is how obvious those statements are. Yes, it spreads awareness, but it does nothing to combat the actual issue at hand. Activism does not end at just spreading awareness. Additionally, constantly seeing news about your people being attacked and murdered every day is both mentally and emotionally draining. Sharing trauma is not activism, and it actually hurts more than it helps. Again, spreading awareness is great, but do so in a way that is not only educational, but also mindful of what the Asian community is going through.

“Knowledge is power. To be able to stop these racially motivated attacks, people need to be educated on these kinds of topics,” Lohr said. “When people learn that Asians can face racism too, we can keep more people in our community safe. This doesn’t just go for Asian lives, it goes for any person of color. When we teach people that racism exists and how we can stop it, it will create a space where BIPOC can exist without fear and hate.”

White supremacy was the foundation of America, so it is no surprise there are people who still support the hate in this country. Why people continue to defend violence and murders of innocent communities, I do not know. It has nothing to do with opinions or politics, just a basic level of empathy and humanity. Hate is a virus, and we have yet to find the cure. This is why racism will never simply go away. These ideas are so deeply engraved in our society that it is almost inevitable Americans grow up to have some type of internal biases or racial prejudice. Insensitive words out of ignorance are something one can be educated on, but voluntary hatred is violence. Being racist is not the problem; one’s unwillingness to work on it is.

We are not asking for much—just acknowledgment of our humanity. There should be a clear line between right and wrong, but that distinction will continue to be blurry as long as humans try to justify their hate for one another. To my fellow Asian Americans, as I am still trying to navigate my own thoughts, please know your feelings are valid. For too long we have second-guessed ourselves, our emotions, and our reactions, as our stories have been diminished to stereotypes. It is when we start questioning ourselves that we stay silent out of fear we are overreacting, but we are not burdens, simply humans who are hurting. I can only speak for myself, but now our people are dying. It is time we stand together and speak for those who cannot.