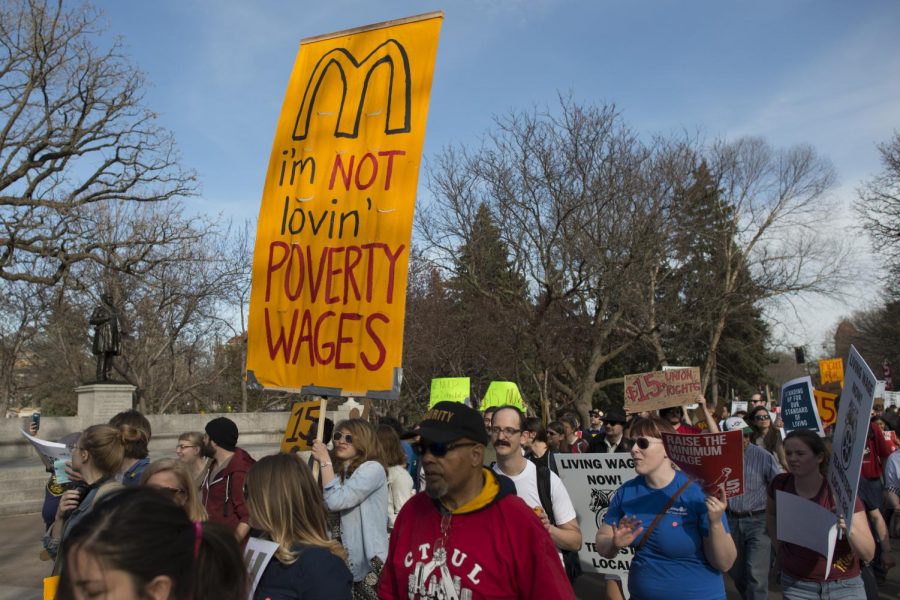 Minimum wage employees go on strike for a $15 minimum wage in Dinkytown, 2015. President Joe Biden has made promises to meet this demand by 2025.

From fast food service to grocery store employees and every odd job in between, minimum wage workers are the backbone of this country. As radical as that statement may seem, Americans’ comfortable and convenient everyday lives depend on the services offered by minimum wage professions. Without these essential services and the people who perform them, our economy would collapse, and yet there still exists a stigma that these jobs hold little value to society. In fact, society holds minimum wage labor in such low regard that their employees live below the poverty line. President Joe Biden is seeking to change that, but even his plans to raise the minimum wage are not progressive enough.

The federal minimum wage has not been raised since 2009 when it rose from $6.55 to the $7.25 Americans still have today. In the span of the last 12 years, costs of living have risen 20% alongside drastic increases in costs for housing and healthcare. In Minnesota, an individual would have to make $20.53 an hour to afford a two-bedroom apartment, according to a 2020 report from the NLIHC.

At $7.25 an hour, one would have to work multiple jobs to stay afloat, which is a lifestyle that is not only physically but mentally demanding, senior Isaac Reiner explained.

“I’ve known people who work two full-time jobs and I have a lot of respect for those people of course, but it’s not healthy. Work can’t be your entire life. It takes a huge toll on your mental health and it’s destructive to your social life. It’s just not reasonable to say that people should be devoting their entire lives to working when we could raise the minimum wage,” Reiner added.

However, Biden’s proposal to raise the minimum wage has also met its fair share of criticism and opposition. Many of those who argue against raising the minimum wage claim that it will only stand to raise the cost of living. Economics teacher Mike Weiss was able to better put this claim into perspective.

“In some areas like Seattle, San Francisco and New York the wage increase to $15 an hour actually could be an economic boost because the wages in these areas of the country are very high and the consumers do not mind or don’t notice as much the increase in prices for goods and services. However, a universal minimum wage of $15 an hour can be disastrous for places where income levels are low across the board; Alabama, Louisiana, Mississippi, West Virginia, and many rural areas of the country,” Weiss explained.

Despite this, the cost of living continues to rise regardless of the 12 stagnant years without a raise to the minimum wage. Who is responsible for it, the minimum wage workers who need a few more dollars to get by, or large corporations who refuse to pay their employees higher wages without increasing the price of their products? In American society, the people have been conditioned to put the responsibility for these issues on the shoulders of the average citizen. In reality, it is the multi-billion dollar companies who should be taking the blame.

In Weiss’s opinion, “Education and training are the proven winners for societal change.”

By increasing accessibility to quality and affordable education and vocational training, and redistribution of wealth through taxes, a solution presents itself.

“The proven method for decreasing wealth gaps is an increase in taxes on the highest income earners (top 5-10%). The argument always reverts back to what to do with those collected taxes: direct payments or programs or a combination of both. We would probably be better off with both, it doesn’t make sense to give money away without training those people how to become entrepreneurs, skilled laborers, or professionals. At the same time simply dangling potential degrees in front of people is hard for many people to realize when they are worrying about putting food on the table for their family,” Weiss said.

Others argue that “burger-flippers” simply do not deserve $15 for their service while other jobs are not receiving a raise. This claim in particular highlights a broader societal issue that needs to be addressed, the widespread lack of respect for minimum wage labor. Instead of criticizing minimum wage workers for wanting a living wage, people need to stand up for raising their own wages if it bothers them. Uniting to advocate for all professions is a key element to progress.

“I think that minimum wage labor, specifically working in foodservice and fast food is really intense work. People think it’s easy or skill-free, but it just really isn’t. It’s very mentally draining and it’s work that deserves to be compensated better, and it’s honestly disturbing that it isn’t,” Reiner explained.

While the country waits on President Biden’s next move, minimum wage workers continue to band together for what they deserve. To advocate for or learn more about the $15 minimum wage, visit the Fight for $15 movement website. As difficult as making these changes may be, it is truly a cause worth fighting for.

“I think that minimum wage labor, specifically working in foodservice and fast food is really intense work. People think it’s easy or skill-free, but it just really isn’t. It’s very mentally draining and it’s work that deserves to be compensated better, and it’s honestly disturbing that it isn’t,” Reiner concluded.