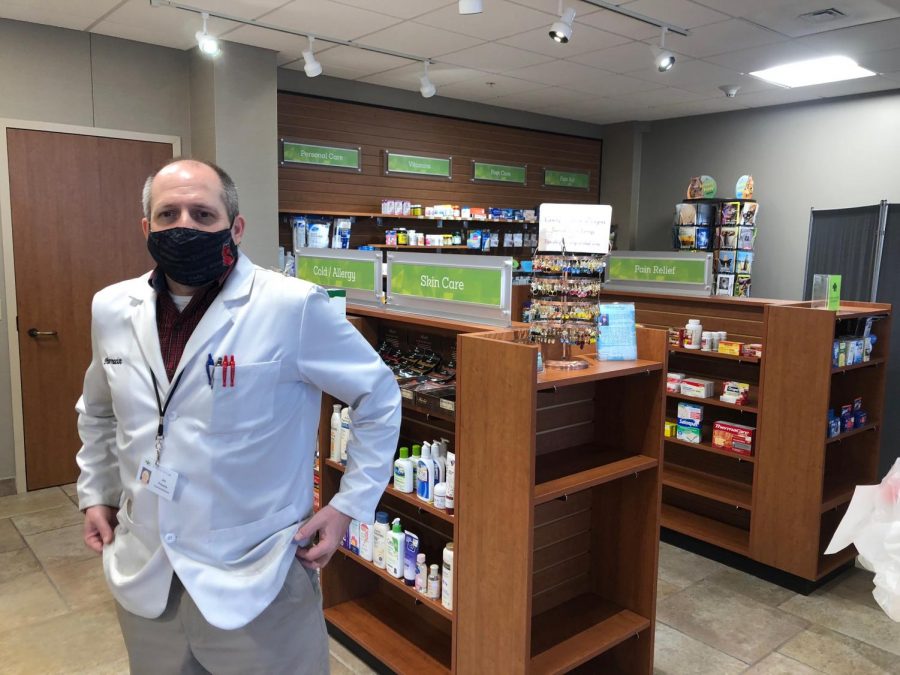 Jim Polucha, owner of Valley Drug in Stillwater, stands in front of an area in his small pharmacy. Pictured is the wide variety of personal care items they offer.

With the help of HealthPartners, a new and family owned pharmacy called Valley Drug has opened. Valley Drug became the only independent pharmacy in the Stillwater Area after opening in May. Owner Jim Polucha, has two main goals: to serve the people in his community as well as he can, as long as he can.

Jim opened Valley Drug this past May after he was offered an opportunity from HealthPartners. The offer was to take over the Lakeview Community Pharmacy that was closing down, and make it his own pharmacy. After working for other pharmacies the past 20 years, he finally has his own.

“I want to thank HealthPartners because they could have sold the closing pharmacy to anyone. They sold their other assets to Walgreens, but this was the only one they sold to somebody that wasn’t a big business who paid them a lot,” Jim said. He expressed how grateful he was for his family, the Valley Drug team and everyone who has helped him be a part of this clinic with his own pharmacy.

Valley Drug is Stillwater’s only independent pharmacy. This means they do not have a chain of locations, they do not have special agreements with any insurance companies and they are not owned by a larger pharmaceutical corporation such as CVS or Walgreens.

Jim said that independent pharmacies like his own are “very rare these days” because of the way big businesses work. “They just keep trying to gobble up the little guys because they are interested in the market share, getting money to their stakeholders and profit sharing,” Jim explained. He also shared how he felt about big pharmacies stating, “I have seen how decisions are based on making money instead of taking care of people, and I got tired of seeing that. As I look at the big picture in our country where so much of it is financially motivated, we have lost ourselves. You know, people are so fun to take care of when money is taken out of the equation.”

Senior Lucas Polucha, clerk at Valley Drug and son of Jim, said having an independent pharmacy helps the community in many ways. “I have never had to experience the sloths at Walgreens or CVS, but I have heard plenty of horror stories.  Most people don’t get to decide whether or not they need medication, but as independent providers we go the extra mile for people who need it and cannot get it at big pharmacies.” Jim added, “The big companies don’t necessarily tell their customers and then they are shocked when they see the prices at ‘non-preferred pharmacies.’”

Valley Drug offers a variety of goods and services, allowing a wide range of needs to be met. They offer prescription drugs, over-the-counter drugs and many personal care items.With COVID-19, they have expanded services as it is even more necessary. A small percentage of their customers are not able to access the pharmacy during the pandemic, but Valley Drug still provided for their customers. They have also been able to provide their services while keeping everyone safe. You can learn more about the services they offer on their website and Facebook page.

“We do regular dispensing and immunizations like the flu shot and more. We also deliver to some certain senior housing in the area and we would like to expand that over time,” Jim said. He also explained that during the beginning of the pandemic they had curbside delivery, but do not offer it anymore.

Jim and his Valley Drug team made their goals very clear. They hope to serve many people in the Stillwater area with great customer service, especially those who may be experiencing poor service with larger pharmacies. They hope to stay open as long as financially possible in hopes of developing long-term relationships with clients and the community.

Jim said, “I look at what the big guys call them, they call them customers.” He explained that he calls them clients not customers because they are “not a commodity” in his mind, rather “a person who has needs to be met.”

He explained that the people who used the previous pharmacy are getting used to Valley Drug because “at first they had to, but now people are coming because they want to. I’m really excited to be able to offer the community a different choice, and I think we are going in the right direction,” he added.

Valley Drug is a small, family owned business with only six employees. Similar as many other businesses, the pandemic has made everything more difficult, and in their case it hurt their ability to provide for their clients. Despite this, they continue to serve their clients and put the people of the Stillwater area first.

Jim explained that COVID has thrown them a curveball and changed so much of what they do. He said, “I am so much of a relationships guy, so I love to see people and connect with them. The more I know about them the better I can help them with their drug therapy needs.” Jim said he hopes that sales stay steady once the pandemic is gone.

“If you forget the money it is a marvelous experience. It is super fun. You get to have smiles with people and develop relationships with people, and that to me is a lot more valuable than a dollar in my pocket. As a ‘little guy,’ this is the biggest statement I can make to protect our future,” Jim said.