Today, teenagers rely on the internet and do not know what it is like to not have it. Living in a digital world has its perks, but there are also pitfalls, especially when it comes to privacy. Often, people know that privacy is a concern, but do not really know what information can be collected with their activity on the internet like their social media and search history.

“When someone is on the internet they have very little privacy and it is hard to get that privacy,” senior Carlos Andrews said.

There have been many data breaches by big companies like Target, Uber and Home Depot. Social media is another place where privacy often overlooked and people, especially teenagers, post whatever they want.

One of the latest concerns has come with Google’s partnership with the healthcare company Ascension. Many people think Google’s involvement violated HIPPA because Google is collecting medical information.

Micheal Teachout, technology and innovation coach, explained almost all types of personal information are available to others or unsafe, like security and financial.

Around 80 percent of teenagers use social media and put too much trust in social media; oftentimes sharing more than they think they are. Teenagers also do not do enough to protect themselves while on the internet, like making all of their passwords the same or sharing passwords with others.

“From SnapChat, Instagram, too much information on locations, activities; passwords are available, I see many students using devices… leaving them lying around while logged into personal information. So I think students are fairly complacent about privacy,” Teachout said.

Advertising companies like Google use what people see and do to make money. For example, when shopping on Amazon, information on what people look at and buy is tracked and later advertised back to the consumer.

Andrews explained advertising companies can take advantage of consumers “in order to advertise to a more suitable person,” and make more money.

Math teacher Nicholas Springer added most people are probably oblivious to what advertising companies can see and that companies can make money off what people do on the internet.

The school uses almost all Google services and products; Google Drive, Gmail, YouTube, Chromebooks and Schoology with Google Drive embedded in are all used heavily by students and teachers. The school has safeguards on student accounts to help protect students.

Teachout explained student accounts are not supposed to get ads, and filters are used to block certain sites and protect what students can and can not see.

“Privacy was a concern early on as well, but more people weren’t using it as ubiquitously as they are today… when you have the location tracking, audio tracking, video tracking, search, all of that is much more prevalent today as a concern,” Teachout added. 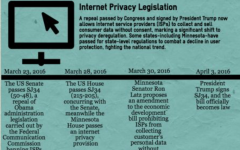 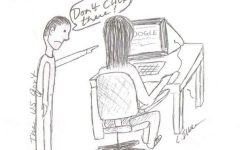 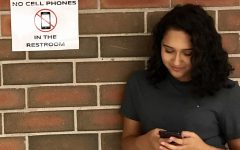