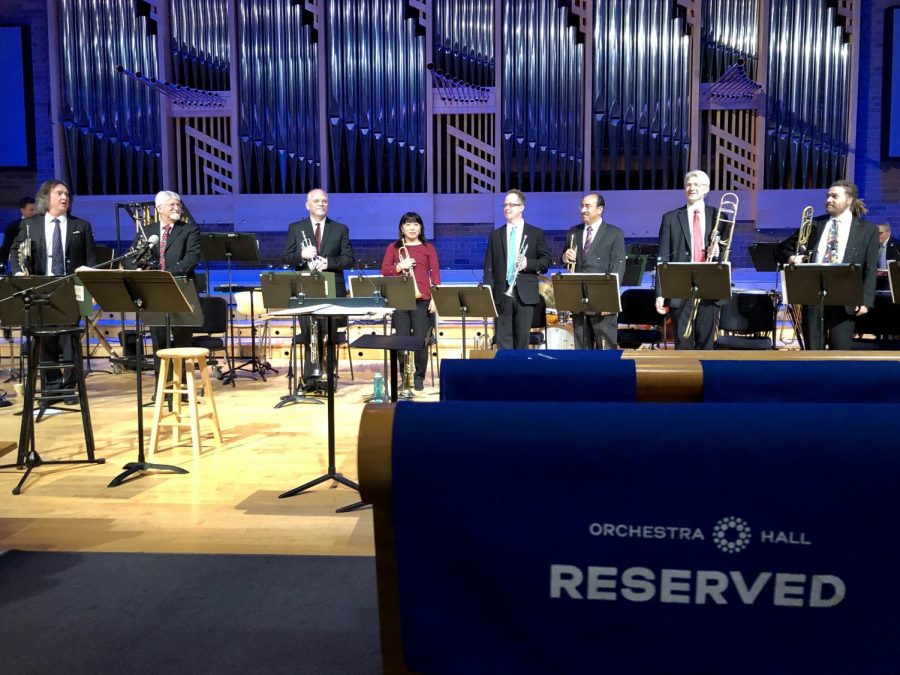 The Minnesota Orchestra's brass section stands and receives applause before the first half of their Holiday Brass concert at St. Andrew's Church Dec. 6. The highlights of the concert included "The Days Twelve of Christmas" and "Messiah - Hallelujah Chorus."

The Minnesota Orchestra recently held a new holiday concert, “Holiday Brass.” The brass section of the MNO performed at St. Andrew’s Lutheran Church in Mahtomedi and Westminster Presbyterian Church in Minneapolis Dec. 6 and 8.

“The librarians are great. They gave me a whole bunch of arrangements. And I took all those arrangements and I went through and listened,” said third horn of the Minnesota Orchestra and creator of the Holiday Brass show, Ellen Dinwiddie Smith.

The Minnesota Orchestra has 80 concerts this season, and only 13 of them are held outside of Orchestra Hall, including the Holiday Brass concert. In recent years, the orchestra has promoted more family friendly concerts, such as performing “Star Wars: A New Hope” and “Up,” along with Young People’s concerts where they play easier, simpler music such as Sergei Prokofiev’s “Peter and the Wolf” or Wolfgang Amadeus Mozart’s “The Magic Flute.”

The new concert is comprised solely of brass players and percussionists from the orchestra and is the only brass ensemble concert throughout the season.

Junior and trumpet player, Ella Grace, said in a brass ensemble “it’s kind of like thinking about in like a pyramid, like a triangle, kind of the highest is on the top, so like first trumpet. (…) If you are like having a tuba or trombone playing those lower parts, they really need to play loudly so that they’re supporting the upper parts.”

The set up of the concert mirrored what Grace described. The trumpets sat in the middle, with lower or supporting, less lyrical roles fanning out from the middle.

Grace also said the hardest part of a typical brass instrument is simply the way to play them.

The trumpet, along with most brass instruments, only has three valves, or ways to change the note manually on the instrument, and on those instruments, “the third valve is mainly just for tuning,” according to Grace.

The new venue choice was inspired by the lack of an organ at Orchestra Hall in Minneapolis. Usually when the orchestra needs to perform with an organ, they do it at Northrop Auditorium.

“The orchestra hadn’t tried it [there] yet so we weren’t sure how big the audience would be,” said Dinwiddie Smith.

There are, of course, also some unseen benefits to holding the concert outside of the Hall.

“Anytime they reach out to communities, they involve other people. Plus, they, the players, sound different in different spaces. Now, that Orchestra Hall is beautiful, but, you know, for some people it’s an intimidating place,” band director Dennis Lindsay said.

All of these actions, Young People’s concert, movies and traveling concerts, have led to significant wins for the orchestra, such as 33 percent of all concert-goers being first timers to the Hall, and the concerts were attended by someone in every single county in Minnesota, according to their 2018-2019 impact report..

The orchestra Artistic Committee was not reluctant in the slightest, according to Dinwiddie Smith, “Corey is our head of our artistic department. She is fabulous, and every time I needed something, there were time when I said, ‘I really can’t tell if I want to do this piece, unless we built it.’ [Corey said] ‘We have to buy it.’ And they just bought it.”

The concert included many recognizable pieces, such as George Frederic Handel’s “Messiah,” “The Twelve Days of Christmas,” and “Dance of the Sugar Plum Fairy” by Pyotr Ilyich Tchaikovsky.

The benefits to playing music the general public knew made it possible for concertgoers to enjoy most, if not all, of the program.

“Music is an art form that takes place in any study,” Lindsay said.

That is exceptionally true with the MNO, being able to bring to life any audience in any venue, be it in a eastern suburb of the metro area, or the most populated city in the state, audiences come to enjoy fantastic music by the orchestra, and that rang true more than ever with this concert. 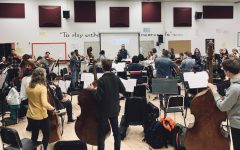 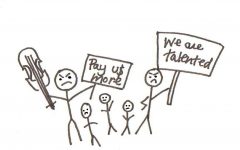