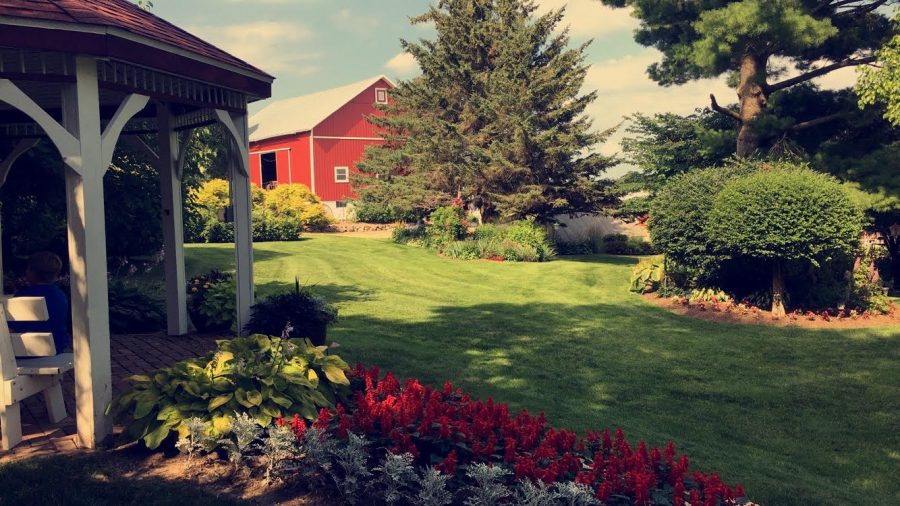 Social studies teacher Mike Weiss and his family are now the owners of a farm on the Willow River. They live on the farm full-time and run it as a family.

Down the Willow River on the Wisconsin side, nestled up on a hill rests a 1920 farmhouse situated on 20 acres of land. Farmland takes up eight acres and fruit trees cover about seven more. Flowers adorn much of the land, and those can be sold to the public and make gorgeous bouquets. A greenhouse sits on the farm as well as a gazebo and a renovated barn that will be used for weddings and events like wine tastings and fundraising events next summer.

The owner of the farm, social studies teacher and baseball and football coach, Mike Weiss, runs the farm along with his wife, Michelle, and their four kids, one in college, and the rest in middle and high school. They live on the farm full time and are using the experience to learn how they can work as a family to run something as big as a farm. Weiss smiled as he explained the future plans and aspirations for the farm.

“It’s going to transition very nice for my wife and I to have that second leg of our life where instead of going to basketball games and dance recitals, we are going to be building our farm and our retirement income,” Weiss explained.

The process of getting the farm going

When the Weiss’s started looking on real estate websites, the last thing they were expecting to find was a gorgeous, river-front farm. However, it is exactly what they found. It has 1500 feet on the Willow River, which is what attracted the family. Initially, it took a lot of up-front work to register the farm and make it into a business. In the past, the farm and barn have been used for over 300 weddings and other events, and it has become the plan for the future of the farm.

The process of getting the farm to serve as a business where they can sell the products they grow and host events was a long one. After deciding they were going to make the farm into a business, they first had to research and make sure there were no other businesses in Wisconsin with the name they chose, The Farm on the Willow.

After choosing the name, they wanted to become a limited liability corporation to protect the family land, the house, and everything else from potential losses. Being a limited liability company means that the owners (the Weiss’s) will not be held personally liable for any of the company’s debt’s or liabilities. Following this, they had to get another license.

“We had to become an official licensed nursery so we can do things like sell the flowers that we have,” Weiss added.

People who used to go to the farm when the previous owners ran it will still come to the farm to pick the flowers. In order for them to be able to buy the flowers, they had to go through the process of becoming a licensed nursery. It was hard work and paperwork to get these steps done, but they were the most vital.

Learning through the work

This past summer, one of the Weiss children, who is now a junior, worked many hours on the farm as his summer job. Usually each week he would work around 20 to 30 hours. He had projects like painting, hanging up lights in the barn, and mowing or upkeep on the farm.

Even mowing was a large amount of work as it took, “over four hours just to mow the grass, and that is on a riding commercial lawnmower, not even a push mower,” Weiss said with an incredulous look on his face.

The job offered flexibility to his son because he could pick his hours. As long as he completed the work done at the end of the day, it did not matter when he did it. His other kids who did not work steadily on the farm as a job still do daily chores, which started before they even owned a farm. They have completely renovated the barn as that is one of the most important aspects of the future of the farm, and the kids have helped a lot with this particular project.

Furthermore, the family can enjoy the barn for other purposes such as hosting friends and family as well. The kids have friends over to sleep in the barn because there is a living-room type space (which would usually be for the bride if a wedding was hosted there), and they can have privacy. Recently, they hosted their parents 20th wedding anniversary party at the barn and had around 200 guests attend.

Also as farm owners, they have also learned how much the weather affects them. With the amount of snow that came in the past year, they had strong flooding. Their pasture was half underwater and they were concerned until they talked to neighbor farmers who explained how it was perfectly acceptable for the pasture to be covered in water. When fields are immersed in water, it ends up bringing up rich nutrients to the soil which is good for the land.

They regularly spend around an hour and a half a day doing upkeep on the farm because, “it is constant work, there is always something to do.”

However, Weiss does not let it interfere with his school schedule. He has kept the same hours teaching and coaching, and while he has less free time now, it does not bother him. He does the work that needs to be done when he gets home, or sometimes in the morning if necessary.

Hopes for the future

They will be planting grapes soon, as they want a vineyard in the future, and the grapes will take around five or six years to grow. It will line up perfectly for when their kids are gone so they have more time to spend on taking care of the farm. They also want to dedicate an acre of farmland to vegetables, and more fruit trees in other parts of the farm. Then, later, a guest house might be built a little further away on the property which will have a better view of the river, and they can use it as a rental.

The main upcoming goal will be using the barn next summer for events and weddings. They want to run it as the previous owners have, and make use of the spacious barn and luxurious surroundings. Once weddings and other events can start being held in the barn, a lot of their hard work will have paid off.

Through the ownership of the farm, the Weiss’s are learning how to cooperate with each other to keep something like a farm up-and-running. It takes patience as they found out, but it has been worth it.

“We have learned a lot of stuff, and we definitely have fun,” Weiss said happily.