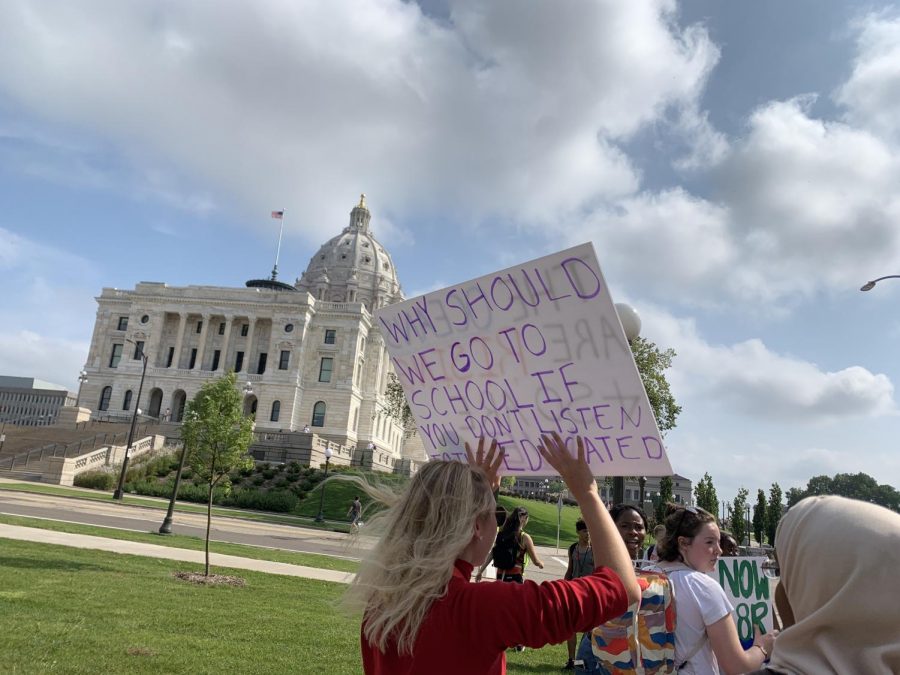 Senior Grace Roske holds up a sign that reads, "Why should we go to school if you don't listen to the educated" during the climate strike Sept. 20. The strikes aims to show lawmakers that people care about the planet, and pressure them to take action.

President Trump announced that the U.S. will formally leave the Paris Climate Agreement Nov. 4. After proposing a withdrawal in 2017, Trump was told the U.S. must remain in the agreement and actively participate for three years. The decision to withdraw from the agreement will not only negatively affect the U.S., but the world as a whole. This however, is not enough to keep our planet safe; people must fight to keep the U.S in the agreement.

A survey conducted by the National Centers for Environmental information concluded that the planet’s average surface temperature has risen about 1.6 degrees Fahrenheit since the late 1800s. While that might not seem like that much, temperature rises like that can have drastic effects on the ecosystem and our weather patterns. In 2015, in an effort to help decrease greenhouse emissions, 197 countries signed or ratified the Paris climate agreement.

The Paris climate agreement aimed to reduce greenhouse emissions to help decrease the global temperature rise. In order for this agreement to remain successful, all major emitting countries must actively work to keep emission levels low.

Student leaders across the state have already begun organizing another climate strike, which will take place on Dec. 6. Student leaders hope a large turnout will help bring awareness to this issue at hand.

“We’re trying to like make people understand it. So then they can actually like help and change it,”  senior Millie Osei said.

In September, the Youth Climate Strike group also participated in the global march on the capitol, which raised a lot of awareness across the globe.

“Even though, the first strike was super successful, that doesn’t mean we’re done. The climate crisis just didn’t stop from that one strike,” senior Grace Roske added.

The Stillwater Youth Climate Strike has started a chapter within the school that aims to bring awareness to the urgency of this issue and what students can do to help our planet.

Senior Abby Andebrhan said that the best way for anyone to get involved is to start small.

Despite a strong stance from today’s youth, the withdrawal from the Paris agreement is still in effect. The world has shown strong support for the agreement and it even has the record for most signings for an international bill in a single day.

By pulling out of this agreement, the U.S. has made it clear not only to its residents, but also the world that it does not care about our planet.

This is our future; to protect future generations, we must fight back and make our voices heard. Withdrawing from the climate agreement will have serious repercussions on the world.

“You have to contact your representatives and lawmakers because they’re the ones that actually have the power to change the law,” senior Omar Omar said.

While everyone can do their part to help the environment, we must pressure lawmakers to keep the U.S. in the Paris Climate Agreement to keep our planet safe. Contact your senators and representatives to voice your support for the climate agreement through e-mail or phone. Contact information can be found through the government website. To get involved locally, a Stillwater chapter of the Youth Climate Strike has formed at the school for any interested students.