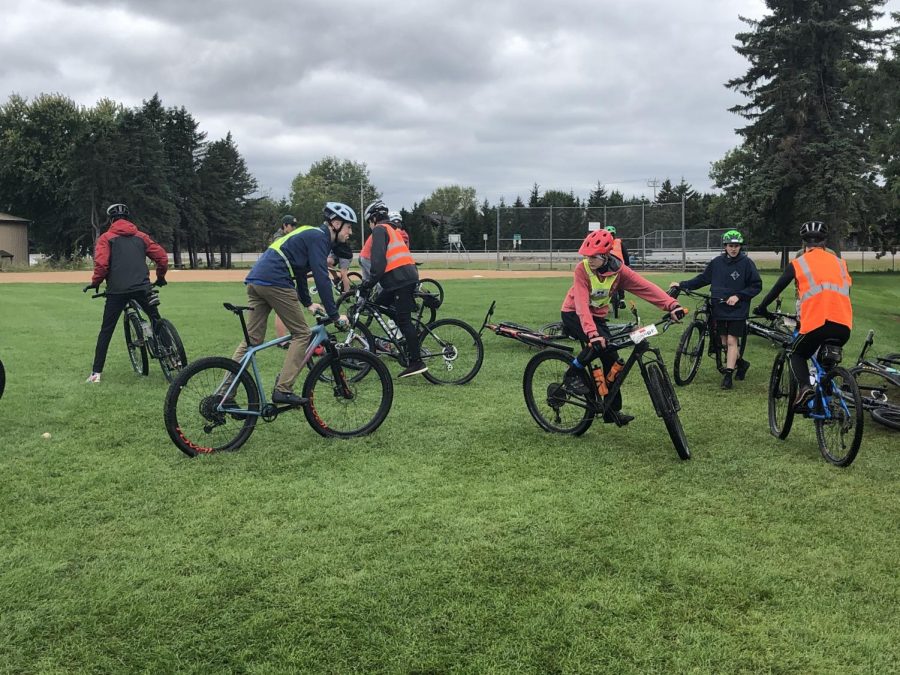 Members of the Mountain Biking team prepare for one of their daily practices. The team must take every available chance to practice to compensate for weather-based cancellations.

The Mountain Biking team had a rough start to the season with rained-out races, canceled practices and unfortunate scheduling, which saw the first half of the season come and go without a single race. The team’s training began on Aug. 30 with Monday through Thursday practices for the team consisting of freshman through seniors. Each team in the league receives two ‘by’ weeks, meaning they race five out of seven possible times during the season.

This year, the team’s ‘by’ weeks fell on their first and third race dates, and their second race was canceled due to rain. Heading into the fourth race, the team had yet to race at all. Despite the team’s lack of experience this season, the team’s captains believe they are prepared for the races coming up.

Junior caption Liv Myers explains this year will be difficult because of the lack of kids on the team. However, she believes they will come out successful.

The team has won back-to-back state championships these past two years, and the team hopes to win another this season. However, reduced numbers of varsity riders may make that goal a greater challenge than previous years.

“A lot of kids have graduated, and I feel like a lot of our fastest riders are younger freshmen and sophomores. You have to qualify to get into varsity, so it takes time,” Myers added.

The coach believes that the team this year is the “strongest, fastest and best team” he’s ever had since co-founding the Mountain Biking program seven years ago.

“We graduated a few really strong riders, but a lot of our younger riders have come back this year, much stronger than they were last year. I like our chances. I think some teams have been able to race and we haven’t yet and that might have an impact, but I don’t think it will,” head coach Joel Nichols said about the team’s chances of winning a third state championship.

In order for the captains and coaches to help run practices better, the team practices in four groups based on skill level. The coaching becomes more serious and focused as riders move into the higher groups. This coaching style is one of the things that contributed to the team’s success in past years.

“There’s the varsity group, the fast kids. That’s where we have a lot of the older kids. That group is very set in stone. Most of us know what we’re doing. That’s where the major coaching happens, that’s where it’s serious,” explained junior Donovan Roddy, one of the team’s six captains.

Roddy explained there are three groups that each have “a progressive level. As kids get faster or as they begin to understand, they get moved up through the groups.”

While the team has missed several practices and races, going into the second half of the season the team’s leaders feel confident that they can continue their two-year winning streak despite the challenges faced early in the season.

“We have a lot of people who’ve gotten a lot faster over the summer, so it should be good,” Myers said. “Our first race is this weekend, and then after I think the season will definitely pick up for us.”