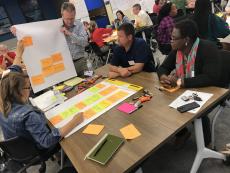 The district task force will have meetings ending in January 2020. They will make a recommendation to the school board to address issues in the district. Members of the team discuss the expansion of the student population and how to create learning environments for all students.

The school district has been through numerous changes in recent years. Many of the ideas executed were made possible and created by the Community Design Team. The team is part of the district long-range facilities task force made up of community members, parents, city officials, students and staff. The school board made the team to foster improvement in the district’s facilities and help make a vision for the future of the district with all the growth that has been occurring.

“What do you do with so much growth in the south, but not growth in the north? How do we manage growth in an equitable way?” social studies teacher and member of the Community Design Team Mike Kaul asked.

Kaul first got involved through the application process where 20 people were picked from about 100 applicants. In an effort to include more people, students and community members were added to the team.

Students being involved has been valued highly as they are the ones who are affected most by the decisions.

“If you empower students, you’re going to come up with a much better solution,” Kaul said.

Meanwhile, the team has already started having meetings, which last around four hours, and they have mostly discussed design plans and what they might want facilities to look like. In future meetings, they will look at demographic data and figure out where growth is happening in the district and why.

Carissa Keister is the District Engagement Manager for the school district and has been working with the team as a liaison between the facilitators hired and the school district. She organizes the meetings and helps with the logistical planning as well.

“That’s really the main focus is to try to look at where the students are. And then what do we need to do to make sure that we have space for them?” Keister asked.

The middle schools could become crowded in the next few years based off the sheer amount of growth in student population, especially in the south.

Junior Brady Schmiechen was in the first group of freshmen to come to the high school as a result of the 2015 long-range facilities plan. He has played soccer for years and is now enjoying the new turf fields, which were also part of the 2015 plan.

Overall, Schmiechen loved coming to the high school as a freshman because he, “thought it was just more people, more classes, just more of an experience than just being trapped in the junior high,” and, “soccer is kind of a big deal for turf…so I got good use out of their proposed bill.”

Furthermore, he agreed the district generally does a decent job of coming up with solutions for issues and dealing with it in a reasonable way. Schmiechen hopes to see further improvements made with the current task force and the upcoming plan.

The team has dedicated their work, time and effort into the recommendation and Kaul said he hopes the board will consider it. The plan is expected to be proposed by early February 2020 as the last meeting will take place on Jan. 1