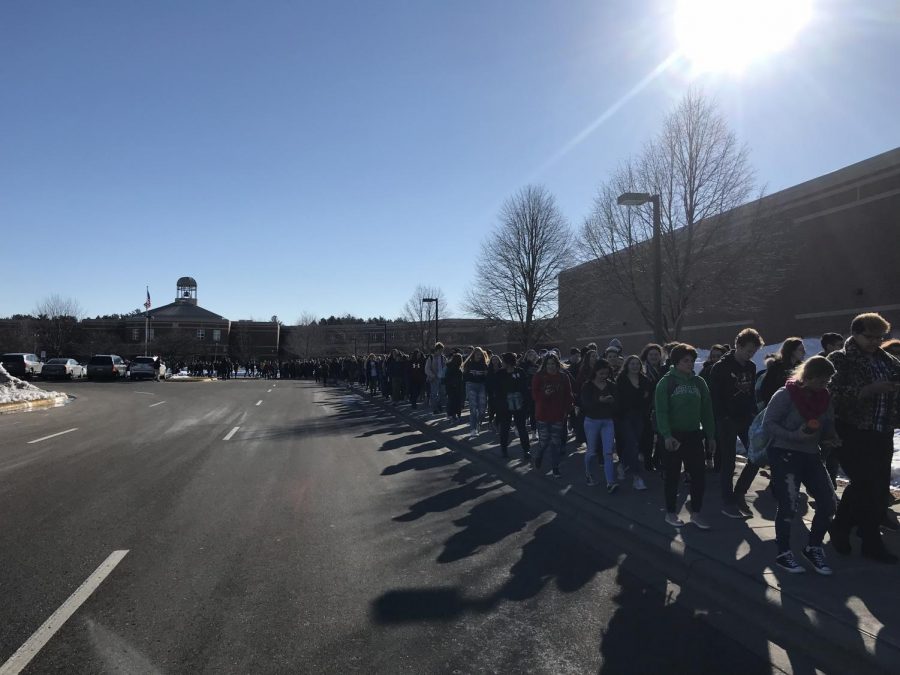 The organizers estimate that hundreds of students participated in this walk out. Students exited the building at 10 and made their way to the PAC where the remembrance was being held. “We may not be able to vote now, but we will be able to vote in one, two years, and our votes will matter, and our votes will change who is in Congress and they will hopefully make an impact on what they decide to do for legislation,” senior and organizer Hannah Gilsdorf says. Hunter Hippel 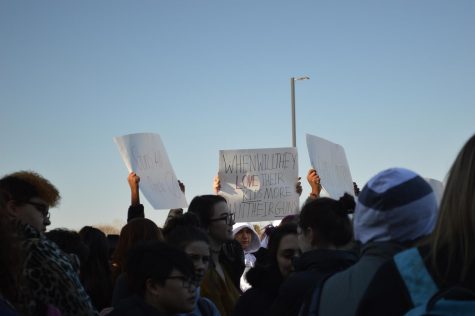 Photo by Mira LaNasaSelect students made protest signs for the student-led walkout on March 14 to protest gun laws and school safety. “It was powerful to step through the doors with everyone, right at 10 a.m,” Maggie Jones, senior and student leader said.

In the weeks following the shooting at Marjory Stoneman Douglas High School in Parkland, Florida there have been a wide variety of responses to the tragedy. Some have been through thoughts and prayers, some have been through social media, but the biggest by far has been the steady stream of marches and walkouts in schools across the country. As students gear up to protest, district administrators have had a variety of responses: some praise, some ban, and some have no reaction at all. These actions and responses, however, beg the question of students rights to protest and how far administrators are allowed to go.

Although students don’t lose many rights in schools, times like these make light of the fact that students do not have the same First Amendment rights in school versus out of school, for a very good reason. Students have the rights that they need to peacefully protest, and asking for many more is asking for trouble.

When in school, students do not have the same First Amendment rights as they would outside of school. Landmark cases such as Tinker v. Des Moines have set the standard for political activism and free speech and expression within the school walls. In different circumstances there may be different protocol, but students are allowed basic rights in school. Administrators on the other hand, are at times limited on what they can and cannot censor and stop.

The 1968 Supreme Court case of Tinker v. Des Moines established that when students enter a school they do not automatically lose their First Amendment rights. The case was started when Mary Beth Tinker and a few other students wore black arm bands to school to protest the Vietnam War. They were told to remove them, and when they didn’t they were sent home and suspended until they would come back without the bands on. Tinker challenged the school district in court, claiming that her First Amendment rights were being violated, and eventually won. This landmark case has cemented the fact that students are entitled to their first amendment rights, so long as it does not make a disruption. 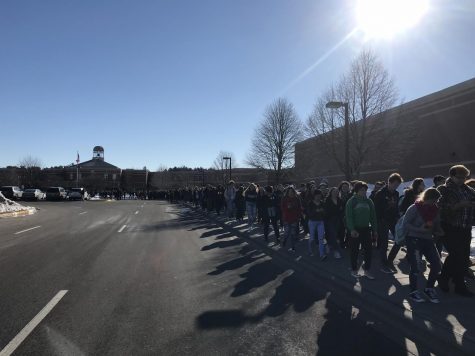 A “disruption” is a loose term that may be interpreted in vastly different ways. In the case of the activism surrounding the Parkland shooting, however, a walkout is a definitive disruption. This means that schools are allowed to be unsupportive of the protest and offer punishments for missing class. The fact that a school is allowed to censor disruptions is a very fair decision, due to numerous safety issues that may arise. Although some schools may try to stop the walkouts, many schools, including Stillwater, are embracing the efforts and students wishes to become politically involved which is commendable.

“I think that there is significant amounts of protection and I think students are really encouraged to share their own opinion [at school],” senior Annabel Gregg said.

As students age from children to young adults they become increasingly politically aware. At the same time they are learning who they are and how they can express their opinions. Since these students spend everyday at school, the building becomes much more than a place to learn about history and math, but a place to learn about the world, themselves, and how to interact with each other in meaningful ways.

“Students in high school are able to apply real world events to the history and the other topics that they’re learning. So I think [politics has] become really integrated in our daily lives whether you’re having those conversations at home or in a classroom. It’s become so prevalent because we’re at an age where we can fit it all together and see the whole picture and see how it affects us as young adults,” Gregg said.

Wearing clothing with political opinions and expressive messages does not mean that school dress codes are disregarded. Students have the right to express themselves in a way that is also in accordance with a dress code. What is not allowed, however, is for a dress code to interfere with this right. Dress codes may not tell students that they can not wear clothing that disagrees with administrative opinion, political, religious, or otherwise. If students wish to wear expressive clothing they are protected in that action.

This is a fair standard, since schools cannot teach students what to agree with, only how to form informed opinions. If a school were to tell a student wearing a pro-gun tee-shirt to take it off or turn it inside out they would need probable cause to. This goes back to Tinker v. Des Moines, and the school would have to claim and prove that the clothing item had caused a disruption in the school day.

“Unless, student actions interfere with the educational process, the purpose of the school, the idea is that students should be allowed to exercise the same rights as adults, including free speech.  Thus, it has been held that students in public schools are not stripped of their rights,” Paiement said.

“I don’t think that it is fair for schools to punish students for walking out or participating in protests.  Such walkouts/protests are arguably part of the educational process schools are designed to provide students.  In other words, this type of activity is planned to encourage both students and adults to think critically about a particular public policy, whether it be the Vietnam War or gun control,” Paiement said.

Although students may not have the freedom to miss school whenever they wish, it is fair to expect administrators not to punish students extremely for missing school due to political protests. The opinions of administrators should not have anything to do with their work, and their feelings should be kept separate from their actions when regarding protests at schools.

“I think [our] administration has been great, actually they’ve done an awesome job of allowing us to use student led initiative, but giving us all the tools that we need it to be safe and successful. So I really appreciate that they have moved flextime to the day of the walkout so students don’t have to miss class, and they’ve really been a listening ear for the concerns that are residing around this issue,”  Gregg said.

Students may have limited rights to protest, but the rights that they do have are sufficient for school hours. Students are allowed to express their political opinions peacefully without punishment. Anyone student who is looking to protest should be aware of what they are and are not allowed to do with regard to their rights. Students who experience a reduction of these rights or if these rights do not seem to be the same as the protocol that they experience should seek out respectful conversations with their administrators. An informed student is a great asset to any political revolution or action, and students have the power to make change. Young people are leading the way in politics today with informed and strong voices, and being informed about school is only part of it.