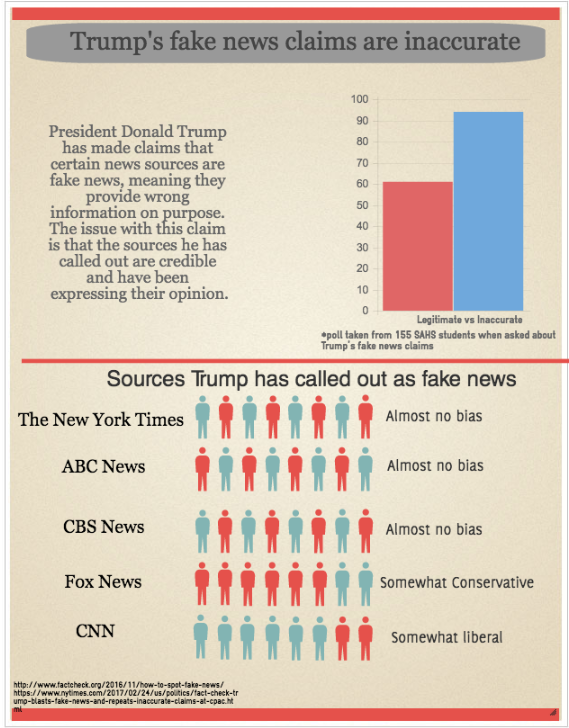 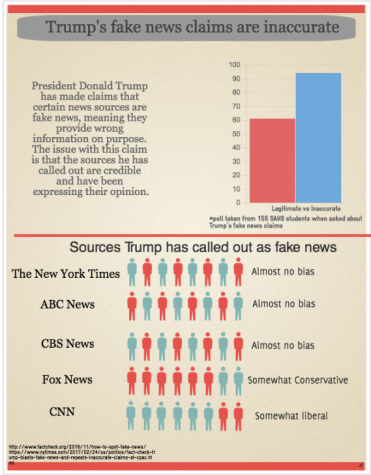 Being informed on current events is one of the most important factors an effective U.S. citizen can have. Whether news is gathered from online sources or a physical paper, it’s important that news is credible. President Trump has recently used the media as a way to form the way people look at him. Claiming credible news sources as ‘fake news’ to make himself look better, needs to stop.

Fake news networks are sources that publish stories with false facts for the public to read and develop ideas based on incorrect information. The difference between actual fake news and Trump’s ideas of fake news is that the networks Trump has targeted are credible sources that state facts, rather than click bait articles who’s goal is to make money off of false information.

At the Conservative Political Action Conference, Trump said, “Look at how inaccurate — look at CBS, look at ABC also.  Look at NBC.  Take a look at some of these polls.  They’re so bad, so inaccurate.”

During numerous different speeches, Trump has stated facts that are completely inaccurate, yet blames news sources for stating “false information”. How does Trump expect citizens to believe his claims on fake news if the information he states is false? For example, Trump claimed NBC, CBS and ABC as fake election polls, but refused to notice that the polls were based off of the popular vote, not the electoral. His false information about the polls is now what he uses to consider ‘fake news’.

On Feb. 17, Trump tweeted, “The FAKE NEWS media (failing @nytimes, @NBCNews, @ABC, @CBS, @CNN) is not my enemy, it is the enemy of the American People!” after a press conference where he refused to answer questions about Russian influence. What makes Trump’s claims extremely unsettling is that in history, Nazi government, Soviet government and the French government during the French revolution, have all made claims towards those against their views and how they are ‘enemies of the people’.

The main problem with these claims is that Trump doesn’t necessarily understand what fake news is. One could call Trump a source of fake news because of the way he states inaccurate facts during press conferences.

At a rally in Florida on Feb. 18, Trump said, “You look at what’s happening in Germany, you look at what’s happening last night in Sweden,” claiming that a terrorist attack had occurred in Sweden the previous night. No terrorist attack happened and once people around the world began to realize this, Trump’s Press Secretary said that he was referring to rising crime, not a terrorist attack. The error in Trump’s excuse is that there was no increase in crime in Sweden from 2015-2016, according to the New York Times. Which shows that he needs to become more informed on what is happening in the world and how to phrase his speeches in a clear way.

Many could argue that Trump makes these claims because the media has been “out to get him” since his election started, but the main problem Trump has with the media is that he doesn’t agree with their opinions. The best way for Trump to combat the media for portraying him poorly, is to do something to make the media portray him better, rather than make it seem as if they’re out to get him.

Trump needs to become more informed on topics he is discussing to allow for informed citizens. In order for Americans to understand whats happening in the world, it’s important that they can decipher the difference between actual fake news and Trump’s version of fake news.