Sophomore Joe Raleigh’s passion for hockey began with watching professional and college teams. Using a stick and a tennis ball as a makeshift puck,  Raleigh practiced what he saw the players on television doing. He may have broken a few things around the house while practicing, but his dad encouraged him to join the hockey team. Raleigh started playing when he was four years old.

Twelve years later, Raleigh has earned a spot on the varsity team, an accomplishment for any athlete, but especially for a sophomore. His competitive mindset will allow him to progress as a player and break past physical and mental barriers. In addition, his ability to play at a fast pace will help the team score more goals and move the puck up and down the ice easier.

Having sophomores on a varsity team is something that is becoming more common. When there are sophomores or underclassmen on a team, they are exposed to more competition and  talent and they can also learn from the veterans who have been on the team in previous years.

When Raleigh found out he had made the team, he knew that games and practices would challenge him, but he was eager to be able to play with the upperclassmen because of, “their hardcore passion and winning mindset.”

Even though Raleigh is one of the youngest players on the team, he still fits in with the upperclassmen, chatting and messing around with them before games and during practices.

All of the guys mess around with you like you’re their little brother.”

Raleigh said,  “All of the guys mess around with you like you’re their little brother. At practice, I have to fill up the water bottles because I’m a sophomore…but it’s fun.”

In previous seasons, Raleigh was a defensive and forward player, but he will play full time defense for the varsity team. At 5’9″, Raleigh is the shortest defensive player on the roster, but his size allows him to be more mobile and have more speed than bigger and taller defensive players. On the ice, Raleigh will usually stay along the blue line, sometimes going down into the corners to try and push the puck towards one of his teammates.

“As a small defensemen, I’m a fast skating and passing player,” said Raleigh “I try to make easy plays. I’m not trying too hard to do it all by myself.”

So far, Raleigh has played in every game this season and the team has won each game by two points or more. He has one assist which he got during the Dec. 17 game versus Park.

Raleigh and the team have been off to a good start this season, and Raleigh hopes the good start will carry into the end of the season games and hopefully the state tournament.

Raleigh said, “The team has a great chance of going far this season and I’m excited to be a part of it.” 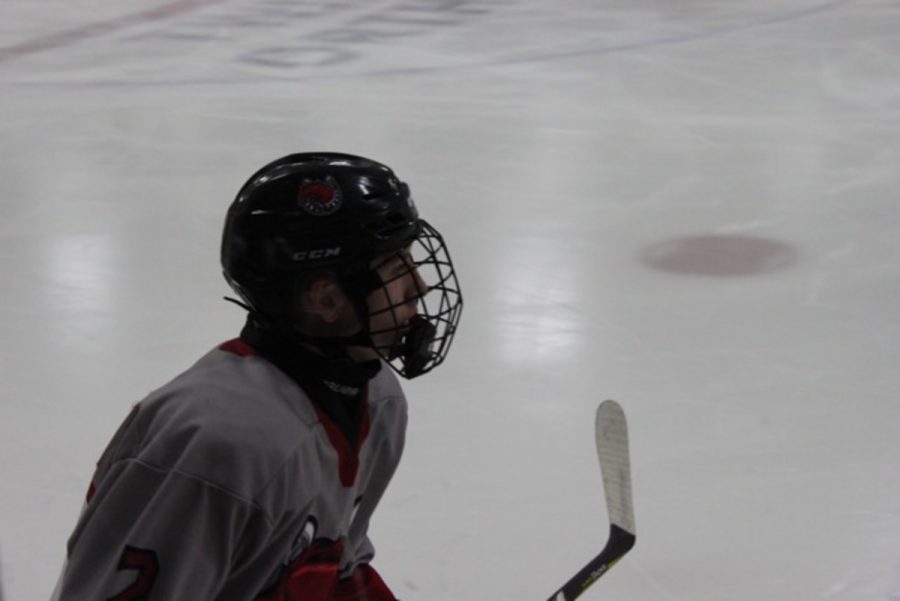 Gallery|5 Photos
Ellie Speedling
Photo by Ellie Speedling- So far in the season, Raleigh has one assist which he got on the Dec. 17 game vs Park. "I knew making the varsity team would be a challenge game by game." says Raleigh.