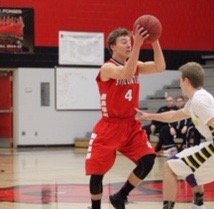 Gallery|5 Photos
Bella Anderson
Photo by Bella Anderson- Lucas with the ball at a game. After recovering Lucas says, "I trust my knee that it's going to be fine and everything."

What happens when your life is suddenly changed? Senior Lucas Braun knows what this is like. Last year he tore his Anterior Cruciate Ligament and this changed his life forever. There are many things that he will not be able to do anymore, and will have to take special precautions before doing. Before the injury, he was a varsity football and basketball player, and now that he has recovered, he is starting to play once again.

The Anterior Cruciate Ligament, also known as ACL is a ligament in the knee that is crucial for playing many sports. It is important for jumping, changing direction and suddenly stopping. If your ACL is injured, it may require rehabilitation therapy to help reduce pain and swelling, or in more serious cases, it requires surgery. If surgery is necessary, the ligament is replaced with a graft of tendon, followed by rehabilitation therapy to help restore function and stability to the knee.

Before the injury, Lucas was a great athlete at Stillwater Area High School, but now due to everything he had to go through he is a changed man. It is always difficult being injured and having to deal with the adjustments to your lifestyle, and even after it is healed having to be more cautious about the body part is difficult to.

Lucas said, “I feel that now even though I trust my knee that it’s going to be fine and everything but my body naturally compensates for it like my other leg is sore because I rely on it more.”

Lucas tore his ACL on Sept. 29, 2015. He was playing in a football game when he was running the ball down the sidelines when all of the sudden he injured his knee by twisting it. It was mid-season and this injury ensured that he would be out for the rest of the football and all of the basketball season.

Lucas said, “For the first month of our season probably when we started games and everything it sucked having to sit on the bench and watch your team play knowing you could be out there but after a while you kind of get used to it.”

The injury was a huge setback to Lucas’s athletic future, for many high school students junior year is when they start being recruited. Lucas said, “The biggest impact I had is that I missed the whole year.” Imagine not being able to play a sport you love for a whole year, and also having to deal with the consequences of the injury. The torn ACL meant he would be out for the one season and he would be able to play again, but he had to work hard to get his knee back into shape.

He spent 10 months recovering from the injury, which is a very long time for someone whose life revolves around sports. It took a lot of hard work and dedication for him to recover.

Physically I would say I was probably a little bit faster and my leg was definitely stronger but I’ve gained most of that back.”

Lucas said, “Physically I would say I was probably a little bit faster and my leg was definitely stronger but I’ve gained most of that back.”

Lucas is now finally back playing again for his senior year. Hopefully he will be recruited and complete his goals for this season.

Lucas said, “I want to go to the state tournament that would be great and hopefully finish top few in the section.” He has high expectations for this year that he will hopefully be able to fulfill.

It is scary to be unable to play a sport an athlete loves, but Lucas was lucky to be able to have a chance to play again. This will hopefully be another great season for Lucas and the rest of the team. Although Lucas may be completely healed and able to play again, but injuries change people and give them a greater appreciation for their abilities.

“The best motivation always comes from within.” – Michael Johnson 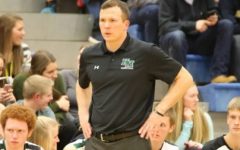 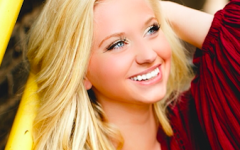 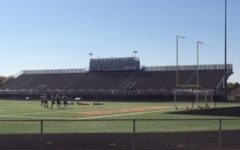 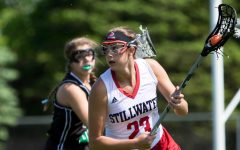