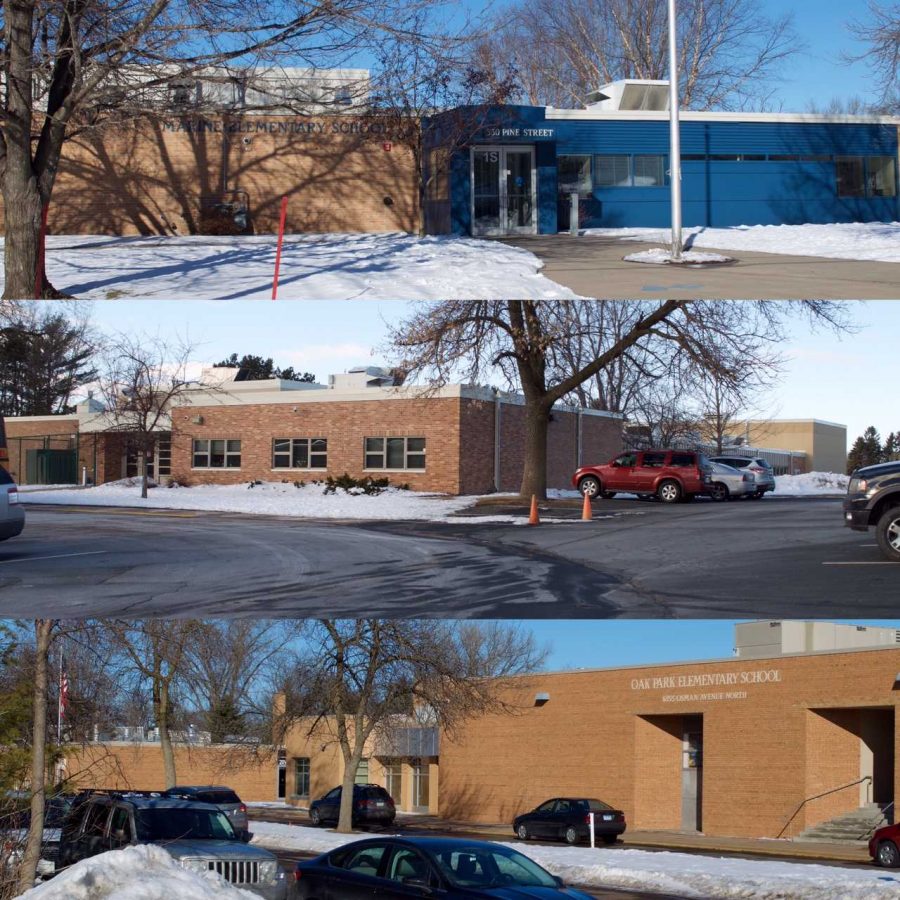 The BOLD proposal was first introduced Dec. 17 discussing the closure of Marine, Withrow and Oak Park Elementary schools. The decision was delayed until March 3 after request by Superintendent Pontrelli. "We were hoping from the meeting that it would be a 'no' vote and that they listen to the community and are willing to move forward and have community involvement in it," Withrow resident Debra Wagner says.

In an unexpected move, Stillwater School District Superintendent Denise Pontrelli asked the Stillwater school board on Feb. 11 to postpone its vote on the closing of three District 834 elementary schools until March 3.

Voting on the decision to close Withrow, Marine and Oak Park Elementary was expected at the school board meeting on Feb. 11. However, after strong opposition from the community, delaying the vote was deemed necessary to better inform the community on the reasoning behind the proposed “Building Opportunities to Learn and Discover” plan, community called BOLD.

“In response to the public we are providing more time for clarification of the plan, more time to connect with community members on proposals put forward and additional time to accept public testimony,” Pontrelli explained at the Feb. 11 school board meeting.

BOLD was first introduced to the public and presented to the school board on Dec. 17 of last year. It was suggested that the closure of Withrow, Marine and Oak Park Elementary schools is needed due to rapid growth in the district’s southern communities, while enrollment in central and northern schools is declining. District leaders believe this disparity creates financial challenges and different educational experiences for students depending on which school they attend.

At the listening session held immediately prior to the Feb. 11 school board meeting when the decision to postpone the BOLD vote occurred, 18 individuals including district parents and teachers voiced their concerns over the district’s proposal.

“I thought it was difficult,” Pontrelli said about the listening sessions and board meeting Feb. 11. “We only had one or two listening sessions before the BOLD proposal so what was challenging was people came up and they had four minutes of voicing questions and complaints and you can’t really address all of them. For me that’s difficult.”

Residents are concerned about tax increases and declining property values they say are inevitable with the BOLD plan. Many feel the proposal came at the wrong time and proceeded far too quickly, not giving the community enough information or disclosing important details. Others feel there was not enough time to respond or to consider alternate proposals. Another concern voiced at the listening session is that three-week postponement is not long enough to ensure the public gets accurate information on the proposal and will only drag a stressful process on longer when it should have been rejected in the first place.

Debra and Clyde Wagner have been part of the Withrow community for 13 years. “We don’t think the postponement was necessary because we think they should vote no. By asking for the delay and the Superintendent stating that her thoughts won’t change on BOLD, that she is still pro BOLD initiative, I don’t know what can be accomplished in three weeks. I’m not convinced that it will do any good,” Debra explained.

Clyde added, “I really believe there is a responsibility to listen to our voices. It would be going against the community if they voted yes. There have been a lot of educated people who have given options outside the BOLD proposal that need to be looked at. In several instances BOLD has been wrong about its facts and assumptions. I think just because of that, the board has the responsibility to look at alternatives.”

Several open forums have occurred since Dec. 17 allowing people to voice their opinions on BOLD to the school district. During the listening session on Feb. 11, the only speaker in favor of BOLD was Lake Elmo ELL teacher, Brandon Auge.

“BOLD is in fact a forward thinking plan positioning the district to provide meaningful learning experiences and support for all kids,” Auge argued. “I believe BOLD would in fact move this district in a positive direction.”

Both sides of the BOLD proposal have created social media outlets to attract public interest and share their views. The Stillwater Area Public Schools posted a list of frequently asked questions and answers on the district website in hopes of earning public support.

The Stillwater Area Public Schools page states, “Regardless of the decision on Feb. 11, we will need to adjust boundaries and help families, students and staff transition to new buildings as a result of the grade configuration changes happening in 2017-2018. If we wait another year to consolidate schools, it would require families and staff to take on yet another transition.”

In contrast to the school district’s position, the website created by opponents of the BOLD proposal,  stopboldcold.org, states, “A delay will only prolong the damage that the uncertainty and stress on our community is already causing. We are requesting that the ISD 834 board reject the request for a delay, and vote NO on the BOLD proposal so that our community can heal, and together the parents, the community, and the district can develop a new plan that truly reflects our collective values and vision.”

District 834 is divided on the BOLD proposal causing high emotion among many members of the community.

“I live north of town, both my girls went to Marine. My personal opinion is that it’s a terrible thing, for at least that small community in specific, to lose an elementary school. It’s controversial, it’s fraught with a lot of emotion. Even just the announcement of the BOLD proposal created angst that win, lose or draw, people will be mad about it for quite a while. I don’t think the anger goes away,” biology teacher Andrew Weaver said.

Eric Anderson, Coordinator in the Office of Equity and Integration, said, “In the last fifteen years we have cut over $23 million which has led to continuous cuts in instructional staff, technology staff, administrative staff, custodial staff, health services staff and special education staff while simultaneously continuing to increase staffing ratios, cut valuable programming and increasing activities fees. It is my belief that if we continue down this path, a once great school district will find itself ‘marinating in its own mediocrity.’ I believe that the BOLD proposal is an invitation for ALL to contribute and for ALL to adjust and will  lead to stronger systems and structures and ultimately increase the number of students who find success in our schools.”

Superintendent Pontrelli has received numerous emails from the community both for and against BOLD, taking all thoughts, worries and praises into consideration.

“I think a lot of people think that the team and I created that divisiveness by putting this proposal forward. From what I’m understanding from the emails I’ve been getting, is this has been an ongoing conversation for many years going on all the way back to the 1970s,” Pontrelli said.

School Board Member Paula O’Loughlin talked personally with concerned community members and shared suggested alternatives to BOLD at the board meeting on Feb. 11. Those alternatives included closing Marine and moving its students to Withrow, establishing a targeted marketing to showcase the individuality of each school to increase enrollment, replacing paraprofessionals with community volunteers, keeping Withrow open but closing Rutherford or Lily Lake, not moving 6th graders or 9th graders up into new schools, increasing class sizes by one or possibly forgoing the expansion of athletic facilities and putting that money toward expanding Marine and Withrow. All of these options will be considered by the board.

“We’re confident that BOLD is the best answer when you look at the three things we’re trying to address. We’re trying to address having more balanced class sizes and providing more student support services. With the district as whole, we’d really like to look at a different type of middle school model that supports kids more then the junior high model and we have to find the savings to do that somewhere,” Pontrelli said. “You’re never going to have everyone happy. We as a team have really been trying to focus on the whole district and our responsibly is for the whole district, not just for a couple of the schools.”

Another concern of the BOLD proposal is a recent notification that the district may be sued by a community group calling itself 834 VOICE (Voters Invested in Our Children’s Education) to stop the shutdown of the schools. The group believes key information was not shared with the community when creating the plan and that the community did not get a chance to respond with the timeline being so short.

As reported in the Stillwater Gazette on Feb. 10, “Attorney Fritz Knaak, who represents the group, served a ‘notice of claim’ against the district stating that the group will seek injunctive relief (preventing closure of the schools), damages in excess of $75,000 and attorneys fees.”

The school board will host another listening session on Feb.18 where alternatives to BOLD will be discussed and an updated presentation will be given by the district along with another opportunity for residents to speak.

“I have never seen our community so motivated in wanting to work with the school district, in wanting to be a part of what we need to do, the initiative. For us they have to vote ‘no’ so that we can go forward as a community,” Debra said.

Pontrelli said, “One thing that gets lost in all this is for me is this has become political and my focus has always been on working with students, teachers, principals and learning and programming. I hope whatever the decision is we can get past the politics to really focus on the learning and what we want for the kids.”