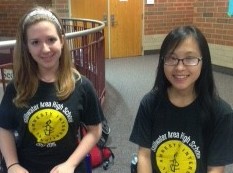 Two members of the Amnesty International Club posted up in the Upper rotunda informing students on the petitions they can sign. 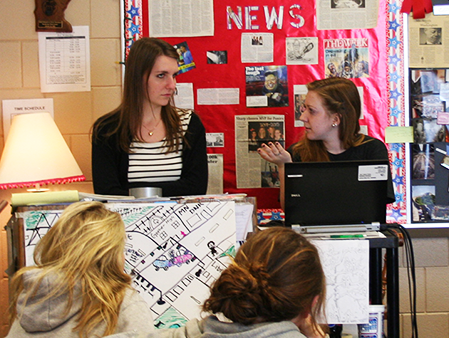 Photo by Rachel LeMire Juniors Shelby Alm and Erika Orin prepare to take over Amnesty International next year as the new presidents. They will carry on the traditions of the club and be a great impact on the success of the club. “I really want to raise awareness of what’s going on in the world, but make it a fun experience at the same time. So many people aspire to make a difference in the world, and this would be a great way to do it!” said Alm.

Alm and Orin joined Amnesty International as sophomores and have dedicated hours of their free time towards changing the world. Both of the new presidents have played important roles in the events put on by the club over their two-year memberships with the club.

“They have both been heavily involved in the club over the past few years,” said Matthew Treacy. “They know what they’re doing and they’re interested in leading the group next year. We had a meeting in which people who were interested in becoming leaders attended, we made sure they were a part of our Human Rights Day and other events that we put on so they could learn the ropes for next year. We chose the two because of their involvement and dedication to the club.”

The leaders have many responsibilities within and outside of the club. The presidents are responsible for running the club meetings and planning events, especially Human Rights Day, as well as letting other students know what the club is all about.

“The new officers and I have the responsibility of organizing events, running all meetings and coming up with ways to not only raise awareness of the violation of human rights, but find ways to act on them and make a difference no matter how big or small. We are also tackling the job of recruiting new members as there are a ton of seniors that will be leaving,” said Alm.

All of the students involved in Amnesty International are leaders within the school, but the who are chosen to lead the leaders have something special. Sophomore Corri Gardner has been with Amnesty International for a year and appreciates all the work that the new presidents have put in over their years with the club.

“They work really hard at all of our events,” said Gardner. “There are a lot of people in Amnesty International that could be leaders just because we are all so passionate about it, but they definitely deserve it.”

To the new presidents, this opportunity is their chance to help let the world know all of the problems that frequently go unnoticed.

“There is so much happening in the world that people don’t know about. I feel that I could open people’s eyes to the truth and make them want to do something about it. Overall, I really want to raise awareness of what’s going on in the world, but make it a fun experience at the same time. So many people aspire to make a difference in the world, and this would be a great way to do it!” said Alm.

Alm and Orin have high hopes for what they will be able to accomplish with Amnesty International next year, they plan to do their best to change the world for the better.