Money should go to K-12, not colleges 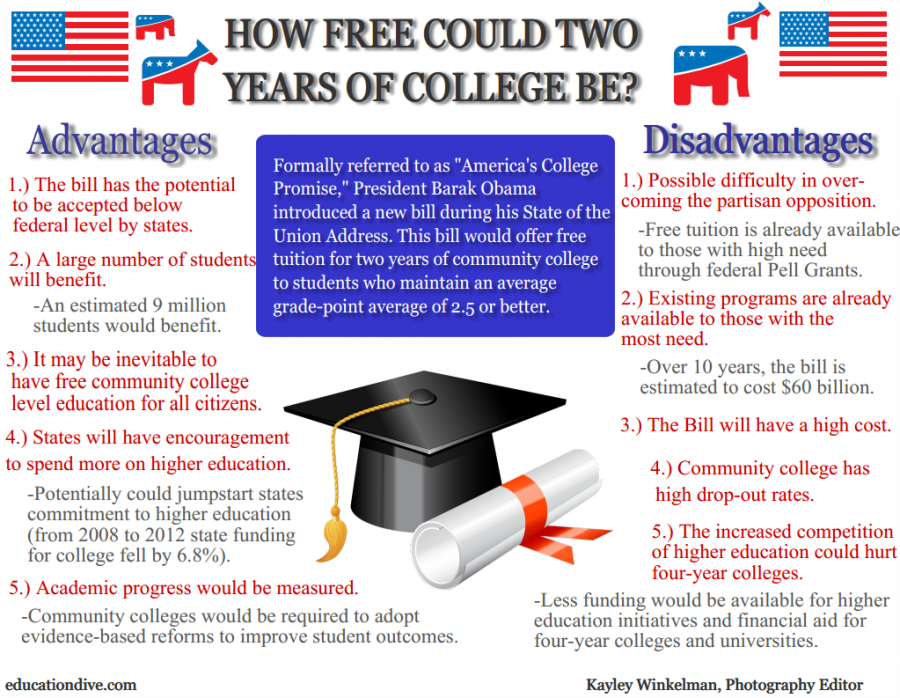 During Obama’s latest State of the Union Address he brought up his own “GI Bill” that includes free community college for two year associate degrees. He claimed that it would help middle class families, saying that it’s “middle class economics.”

Making community college free is a generally good idea, but with all of the logistics that would need to be worked out and the fine lines that are associated with an education it is simply a better idea to put the money into different areas of education.

If two-year degrees were suddenly made free it would create a huge jump in college attendance, essentially overwhelming the entire system. More people with college degrees would create a shortage of people to preform unskilled jobs.

The White house released a fact sheet stating, “This Budget shows what we can do if we invest in America’s future and commit to an economy that rewards hard work, generates rising incomes and allows everyone to share in the prosperity of a growing America.”

This is completely idealist thinking, as not everyone in America can prosper. It is economically necessary to have people in unskilled jobs. Not only would it crash our job market, but also our economy if the nation was left with no unskilled workers.

Tamar Jacoby from The New York Times said, “If they were eliminated, most would not be replaced. Instead, whole sectors of the economy would shrivel.”

Associate degrees are designed to train people for middle class jobs. If people were able to get a degree for free, it would eventually flood the job market, making it difficult for many people to get jobs in the long run.

According to the US Department of Education, the federal government contributes, on average, only 8.3 percent of the total amount spent on public K-12 education each year. Taxpayers “spend an estimated $373 billion for higher education.”

The massive amount of money spent on higher education would be much better spent on K-12 education. Without a concrete primary education, college would be difficult and not used to its maximum potential. The whole purpose of K-12 education is to build a foundation of knowledge to use in the future.

Minnesota is proactive in the funding for education, as governor Dayton recently issued a bill that allocates more than $344 million to students through 12th grade.

As President Obama will continue his push for free college degrees, the nation will continue the debate on whether it should be put into action or left on the steps of congress.

Instead of putting money into higher education, it should be put into K-12 education to help build a better base of knowledge for our countries youth.