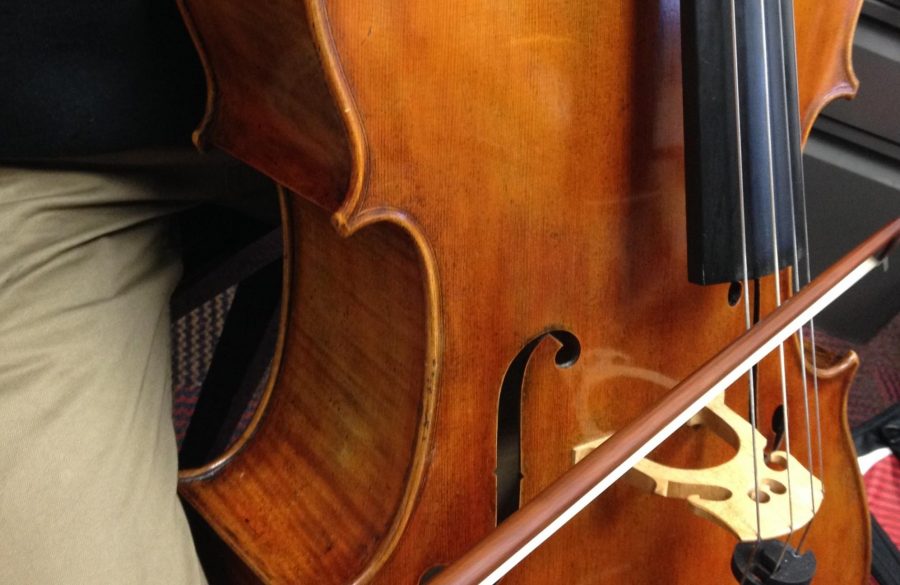 Photo by Amelia Schneider
Concert features an eclectic jumble of music from the four different orchestra ensembles. Each group plays a variety of music, from Mendelssohn to Mozart to Rutter. Junior Jonathan Luk, Concert Orchestra member, practices after school to prepare for the concert. Sophomore Ava Coleman commented, “The pieces [Symphonic Orchestra plays] are kind of a mix of music. They seem fairly simple but have certain aspects to them that needed to be tweaked and mended.”

As the auditorium lights went down and the stage lights went up, the crowd silenced and the symphonic orchestra opened with Norman Leyden’s Serenade for Strings: Prelude.

On Nov. 20, Stillwater had  their annual fall concert. The concert began at 7:30 p.m. and lasted nearly two hours. The orchestras played songs by composers such as Mendelssohn and Rutter as Orchestra teacher, Gerard Jones conducted.

Choosing the right pieces for a concert is a very difficult process.

Jones said, “I pick the pieces for a combination of pedagogic value, audience interest and student interest.”

Concerts take a lot of practice and preparation to be successful. It takes months and months of preparation time and determination.

Junior Jonathan Luk said, “Everyday  in class we rehearse with relentless focus from the beginning of the bell to the end. That does not include the time that many of us spend at home, practicing our parts so when we get to class we can really enter the depth of the music we are playing. It also takes consistency because when you do not practice even for a day, you lose things you learned on a previous day.”

Some of the pieces require more time practicing as they are more difficult. Without the practice, the orchestra as a whole will sound off.

Senior Sam Thueson said, “Some of the pieces we play are very challenging musically, so it is required that each musician enters the room with an open mind and an unrelenting sense of urgency and that they have practiced the music for the sake of those around them.”

Each section of the orchestra is responsible for their own part in each piece they play. A composer composes his or her music for a single ensemble. The ensemble is made up of many different people, but all these people really make up one larger ensemble.

“Each section knows we have constantly changing roles in each piece we play, and that it is important to see how we fit in at one particular moment and play out when we need to and back down when the piece calls us to do that,” Thueson said.

Every section in the orchestra has a different sound from the other. Each sound comes together to make what the composer has asked for.

“It depends on what we are playing,” Luk said, “but, most of the time violins get the melody, violas get the counter melody and cellos and bass get the rhythm, but things change throughout the piece.”

Thueson said, “I really like the Mendelssohn piece because it has such a big sound and it was the first thing our orchestra [concert orchestra] played together for an audience.”

“The Mendelssohn is such a massive piece that just sounds so cool, where as the Van Williams is very rewarding once it is played through, and the Dance of the Tumblers was just very fun to learn and play,” Thueson added.

“I liked our [concert orchestra] opening piece,” Luk said, “It was the biggest and most epic. Everything just kind of clicked together and we really started to make music. All the solos were gorgeous and everyone knew their part so they were not guessing.”

The pieces that were played have a different effect on every member of the orchestra. However, for many, the pieces are just right for their playing abilities.

Thueson said, “I really liked the pieces we played. Mr. Jones knows what our orchestra is capable of and always picks pieces that seem to fit just right.”

At the concert, they noticed that playing a piece in the orchestra is more than just playing a bunch of notes that sound good together.

For future concerts, the pieces will begin to become more difficult as the orchestras playing abilities continue to increase.

Jones said,”Hopefully for the winter and spring concerts the students will have more technical ability and will play better and the music will sound better.”

The orchestra concert was alluring.  Concerts to come are sure to be just as captivating, if not more.