Firearm laws have been a huge debate because people have been battling passionately for their side on how the general public can buy and use firearms varies greatly in the state and federal levels.

Pro gun advocates do not think that new gun control laws should not be based on how many firearms are being purchased by people. Their issue is  around how guns and ammunition get into the hands of mentally ill people; some of these people then use them to cause great harm to human life.

“These mass shootings are not the cause of a human who is in a stable mental health condition.  The majority of shooters are mentally ill people who haven’t been treated right,” said junior Colin Eason.

The Navy Yard shooting, a one-man operation controlled by ex-Navy cadet Aaron Alexis, is a perfect example of this.  Alexis went out of control on a shooting rampage that ended in the death of himself and the 12 people he killed on Sept. 16.  It was his belief that he was being controlled by extremely low frequency waves. 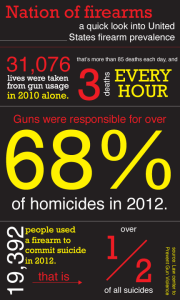 “The Second Amendment tells us that all people have the right to keep and bare arms, but the writers didn’t, or couldn’t, know about the advanced mental and social illnesses of the modern day,” said Officer Fred Kropidlowski of the Oak Park Heights Police Department.

Another big issue in the gun control debates is whether people should go through background checks to buy any sort of firearm besides handguns. Background checks are mandatory for handgun purchases.

“The only reason they do it for handguns is because they are so much easier to conceal where you can carry them around in public,” said Kropidlowski.

Gun control has very strict and practical laws for those who decide to use and carry firearms in public legally with a Permit to Carry.

“Gun control doesn’t affect me, but it affects the people I deal with.  People just need to be aware of the laws put in place that affect them.  For example, people who have a Conceal to Carry permit cannot be above a .04 BAC according to a statute in those set of laws that they agreed to follow.  Us law enforcement officers in the area have dealt with this issue only a few times over the last several years,” said Kropidlowski.

The future of gun control is uncertain, but one thing is for sure, there will still be people who use their firearms the way they were meant to be used: sport shooting, hunting and self defense from ruthless criminals.  All the while, their next door neighbor could think firearms only cause terrible crimes and should be restricted to military use.   Pro Second Amendment advocate following Americans including myself want to keep laws surrounding firearms stricter around mentally ill people, and not to hinder the law-abiding citizen’s Constitutional right to bear arms.