The Pony Express • May 31, 2022 • https://sahsponyexpress.com/106402/opinion-3/nerf-war-needs-improved-player-regulation-administration-honesty/ 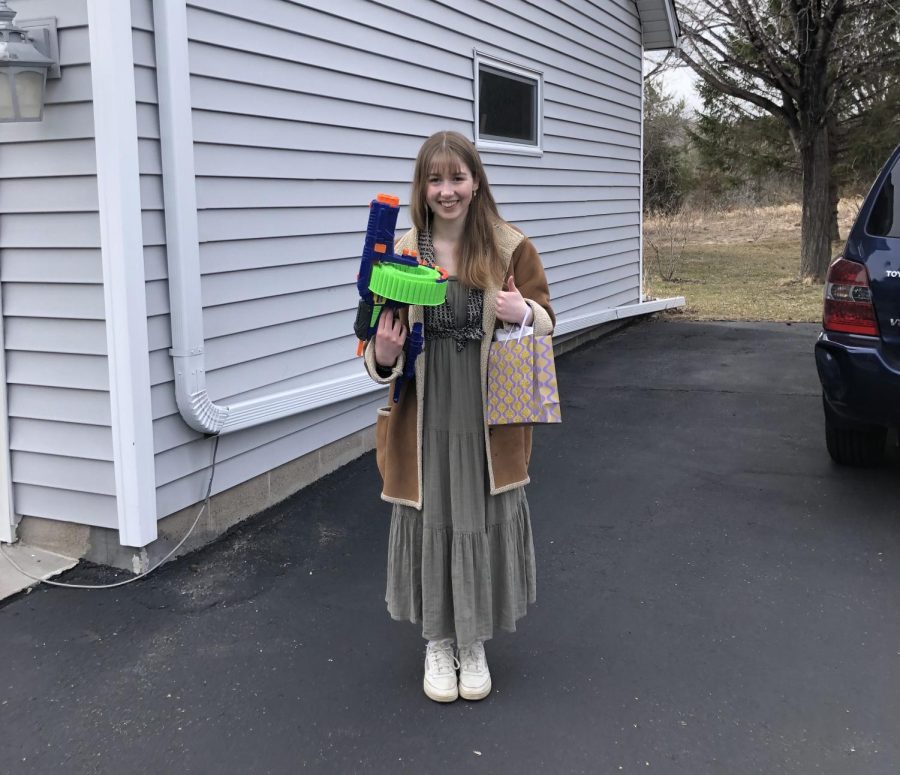 Junior Lydia McFarlene holds up a Nerf Gun, planning to go get some Nerf War kills. Nerf War begun on April, 8 and plans to run through the summer.

Junior Cayleigh Benson looks down at her watch and sees that the clock reads 9:15 p.m. Sweat trickles down her forehead. The tension is high. Cayleigh is camping outside Kwik Trip waiting for her friend to walk out the doors. She sees the door open. It is them. She bolts out of her car, Nerf gun in hand. “Click,” the Nerf gun dispenses a bullet, and it hits them straight in the chest. The shock on their face says they did not see it coming. “Ah dang it!” Her friend says. “Gotcha!” She replied, adrenaline still pumping through her veins.

What is the Nerf war? The ‘Nerf war’ is more or less a fun way to connect with friends, show one’s Nerf skills and even make some money in the process. The point of the games are to stay in the game the longest without getting shot by a Nerf gun from another person in the games. Although Nerf is just a way for teenagers to have fun, many problems from teenagers in the Nerf war have come to the surface.
CHEATING
One problem that arose was cheating. Some players chose to cheat instead of play fair. Along with it, the Admins (senior facilitators of the games) even cheated with the players.

“There was a lot of cheating that was happening. There’s just so many payoffs happening and people selling their lives and people paying off the admins to get back in the game and people claiming they didn’t die, people claiming they did die and just so much so chaos,” Benson said.
NERFING IN PUBLIC/IN BUSINESSES
Another common problem was with the Nerf war impacting public places/businesses. For example, Target was a hotspot for Nerf war killings. Many people were seen getting killed in the store or in the parking lot. Target employees eventually started to kick players out that had Nerf guns with them, due to disruptions arising in the store.

Junior Aliyat Adedayo works at Target in Woodbury and saw a lot of Nerf War action. “One time I saw kids running in and out of the building. They would be running around the building and then like when they got kicked out, then running in the parking lot like down the streets… I remember there was a car chase one time and the cars were going in and out of the parking lot. It was dangerous.”
ADMIN FACILITATION
The Nerf war admins had many jobs. Some included ruling if a kill was valid, making up the rules, collecting the money for the winners at the end, and managing the Twitter account (they tweet and tag the admins if they got someone out). Trying to get teenagers to adhere to rules is a hard job. Other than that, managing money, and keeping people honest is an important part of being good admins too.

Benson thinks they “had a lot of people paying the admins to get back in the game.” She argues that they were not as honest as they could have been. “I think that if the admins were not we’re just in it for the money, that would have made it a lot more fair for like everyone else.”
WHERE IS THE MONEY REALLY GOING?
The entry fee cost differed by number of players per team, but it was up to $70 for 8 players.  On top of that, if they died, they could pay a fee to get back in. Some questions about the fee arose like: Does that money go into the winners pot? Do the admins keep it for themselves? No one knows.

Junior Abby Kerber describes how many people do not know where the money is going, or how much there was in the first place. She says she wishes that was common knowledge so they did not get cheated by the admins.

A common experience with Nerf war is that people have had a blast connecting with friends, and meeting new people. Players love that it is a unique way to spend their Friday nights. But problems under the surface rose over the last few weeks, and the admins integrity has been questioned, along with Nerf war participants’. The Nerf war clearly has some flaws, that hopefully can be resolved in the future.