Hartmann thrives through his journey as an EMT 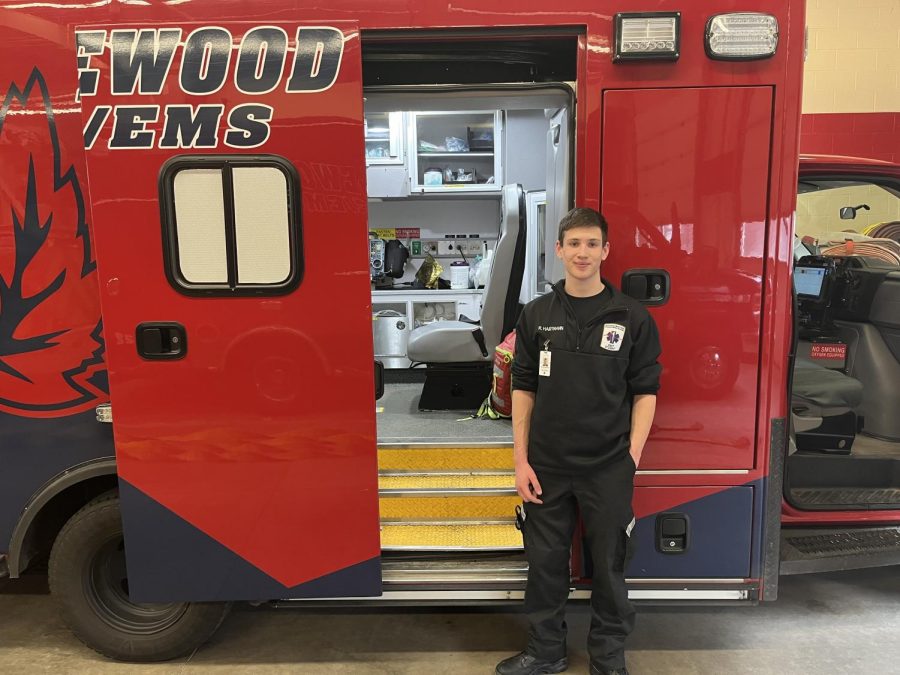 Senior Richard Hartmann went on a ride-along with the Maplewood EMS on May 2. He practiced his medical skills and gained more useful knowledge.

Sirens filled the neighborhood as the red and white lights flashed down the street. Senior Richard Hartmann’s adrenaline rushed through him as he sat in the back of the ambulance. The ambulance came to a jerking stop and Hartmann rushed out the doors, prepared for what was coming next.

As a senior in high school, Hartmann was deciding the path he wanted to take after graduation. Inspired by his dad, he decided to become an Emergency Medical Technician. Though the process was long and difficult at times, Hartmann worked hard to earn his EMT license. His knowledge in the medical field was also helpful when he joined the United States Marine Corps after high school.

Hartmann made a good EMT because “he is really good at adapting and very good at fast-paced things,” junior Nathan Volkman said.

As a young boy, Hartmann looked up to his dad as an individual who could accomplish anything. His dad served in the USMC for many years and earned his paramedic license as well. His daily motivation to help others with quick thinking and an abundance of medical knowledge inspired Hartmann to become just like him. Though the process to become a paramedic was tough, Hartmann knew he could do it because his dad did it.

Hartmann explained how he always looked up to his dad and because of this, he wanted to become a paramedic like him.

To become an EMT, Hartmann needed to complete the National Registry of Emergency Medical Technicians training program. The course involved an extensive written exam along with psychomotor exams, which involved CPR, suctioning and ventilating. He also had to do multiple trauma assessments and learn how to work an oxygen tank. The most challenging part of the course was the medical tests. These tested Hartmann’s medical knowledge and how to apply it to a patient.

“With medical [assessments], you have to get their symptoms and go through what you’ve learned and figure out what’s wrong with them and how to fix them. Sometimes you can’t even fix I mean, you have to just transport to the hospital,” Hartmann explained.

Though the coursework was tough, the fun began when Hartmann got to perform scenarios. These put his medical and trauma knowledge to the test. Often partnered up with another trainee, they were put to the task of successfully getting a patient ready for transport. They were given a stretcher and bags filled with medical supplies. These scenarios allowed Hartmann’s teacher to access if he knew the correct medical knowledge and how to apply it to a patient.

“You just have to pretty much get him ready for transport. You have to go through everything you have to like make sure you take all the spinal precautions to make sure they’re breathing,” Hartmann explained.

Along with the scenarios, Hartmann went on numerous ride-alongs with fire departments across the Twin Cities. Though he sometimes went multiple hours without a single call, the beeping of a 911 call filled him with excitement. His role in the ambulance was very crucial as he both soaked up information like a sponge and tested his medical knowledge and skills. Paired with two professional paramedics or a paramedic and an EMT, Hartmann was responsible for taking the patient’s vitals, helping move the patient and asking them a few questions. When they arrived at the hospital, he was also responsible for checking the patient in.

HOSA advisor Doug Long explained how an “emergency medical technician is one of the people that is a first responder in case of a medical emergency” and how “their job is to assess the patient and stabilize any life-threatening conditions” so the patient gets easily get to the hospital.

Throughout his training, Hartmann learned an abundance of useful knowledge that he would continue to use in his life. Getting his EMT license was one of the many steps he took to eventually become a paramedic like his dad. Hartmann was having fun during the process as well, having made connections with new people and listening to multiple interesting stories from experienced EMTs during his time at fire departments.

Hartmann explained how it was pretty useful knowledge to know even if he was not working as an EMT. Knowing how to use first aid was useful as well.

After high school, Hartmann joined the USMC. Since he planned on keeping his license for four years, he had to keep the medical and trauma knowledge fresh in his head while he served. This is because EMTs have to renew their license every two years. Eventually, Hartmann planned on going to paramedic school and earning his paramedic license.

Being an EMT is “definitely cool. They [paramedics] want me in the ambulance and help patients ” even though they will “just kind of like not let you do anything for the first couple of times until they realize that you like actually know all this stuff,” Hartmann concluded.